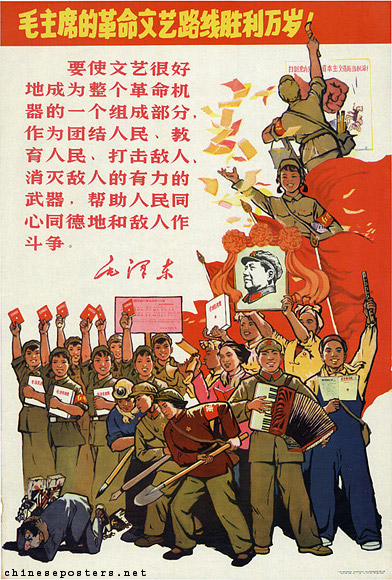 A worker, soldier and peasant with brush, pen and spade threaten a figure wearing a Liu Shaoqi mask, crouching in front of a pillory with chains and the characters 修养 (Cultivation - Xiuyang). This refers to Liu's influential 1939 publication with the full title 论共产党员的修养 (How to be a good Communist), now attacked as a harmful rival to the Little Red Book and undermining correct Mao Zedong Thought.

Behind them a group holds Mao publications, a Mao portrait and musical instruments. The worker on the right has a booklet Selected Revolutionary Songs 3 (革命歌曲选 3), on the back page is the text to the song "Fighters love to read the Three Old Articles" (战士爱读老三篇). A Red Guard in the middle of the group holds high a pink placard with the text and notation of the song "The force at the core leading our cause forward" (领导我们事业的核心力量). This is a Mao quotation set to music, the first sentence of the Little Red Book: "The force at the core leading our cause forward is the Chinese Communist Party". Such placards were commonly used in organised group singing.

Top right a mural has been painted criticising those in the Party that follow the "capitalist road".

The long text in red characters is from Mao's Closing Remarks at the 1942 Yan'an Forum on Literature and Arts, republished in the Little Red Book (chapter 32):
要使文艺很好地成为整个革命机器的一个组成部分, 作为团结人民，教育人民，打击敌人，消灭敌人的有力的武器，帮助人民同心同德地和敌人作斗争.
We must ensure that literature and art fit well into the whole revolutionary machine as a component part, that they operate as powerful weapons for uniting and educating the people and for attacking and destroying the enemy, and that they help the people fight the enemy with one heart and one mind.