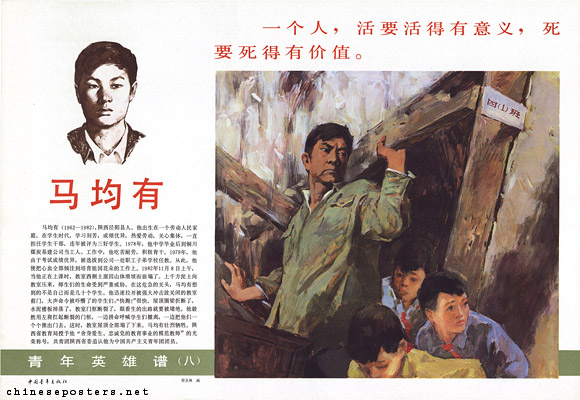 Ma Junyou (1962-1982) was from Jingyang, Shaanxi Province; he taught in a school of the Tongchuan Coal Infrastructure Company since September 1979. On 8 November 1982, when he was in class, he discovered a large landslide on the cliff behind the classroom. Only one meter away from the doorway, he could have escaped smoothly, but he held the collapsed door frame with his shoulder while organizing the students to evacuate. In the end, all 48 students escaped, but Ma was hit in the back of the head and neck by the collapsed ring beam and died. On 7 January 1983, the Shaanxi Provincial Government posthumously recognized Ma as a "revolutionary martyr".