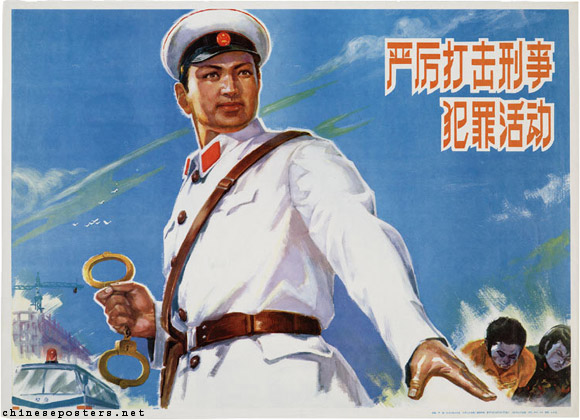 By the late 1970s, a new body of laws was promulgated in order to create a system of socialist legality. Included was the first PRC Penal Code, containing the rules that were to prohibit a repeat of the burning, smashing and looting, as well as the indiscriminate prosecution of often innocent victims that had become practice during the Cultural Revolution.

The new rules were propagated in various ways, including a cartoon-like Illustrated Penal Code of the PRC (Shanghai 1982), containing many useful, easy-to-understand illustrations. Moreover, a number of multiple-sheet educational "comic strip" posters was published, both in colour and black-and white, to deepen popular understanding of the new laws and regulations.

These strips often recounted true events of the recent past, usually of (young) women being victimized by men, either for material gain or for carnal pleasure. Of these laws, the newly-formulated rules that applied to the protection of the rights of women and children were portrayed most frequently, shedding light on a persistent dark aspect of Chinese society.

It seems that despite past pronouncements to the contrary and despite the professed equality of all, the official guarantee of the social position of these two demographic groups in particular needed extra attention, leaving no doubt about the fact that women and children continued to be victimized by males. As a whole, the body of posters related to these subjects functions as a catalogue of male chauvinist, male ‘feudal,’ or simply male criminal behaviour.

Given the traditional Chinese appreciation of bright colouring, it is interesting to note that the materials were published in a simple black-and-white cartoon-style. The quirky close-ups and meticulous attention to the depiction of non-peopled spaces are quite reminiscent of the Corto Maltese

This is particularly the case with the two-sheet ‘Son lives in the "Golden Bell Hall", mother dwells in the "sheepfold"’ above, recounting the story of a son living the good life in a spacious appartment, no doubt as a result of the modernization policies, while he neglects his mother, who is forced to live in a stable.

However, it is not merely gender crime that is addressed. Combatting corruption started to receive attention in the early 1980s as well, and has been high on the agenda of both crime busters and party rectifiers until the present day. 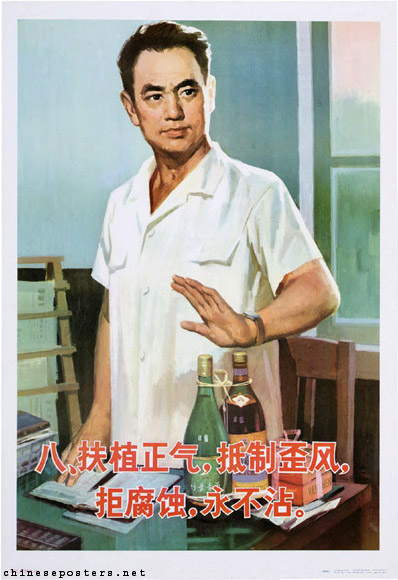