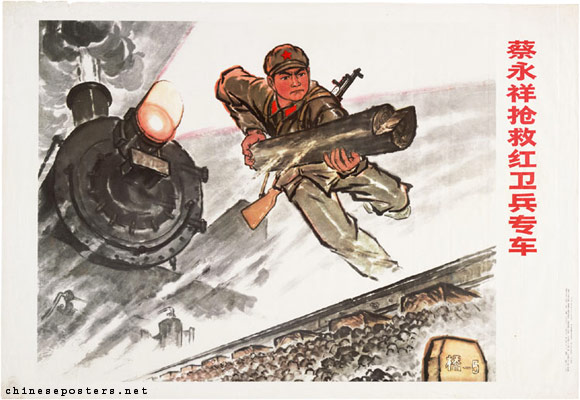 Cai Yongxiang (蔡永祥, 1948-1966) was born in a poor peasant family in Feitong county, Anhui Province. He enlisted in the People’s Liberation Army in February 1966. Soon after, he was assigned to guard the Jiantang River Bridge, which made him deeply unhappy: he’d rather driven a tank or a truck. However, Cai used Mao’s so-called "Three Constantly Read Articles", consisting of "In Memory of Norman Bethune"

, "The Foolish Old Man Who Removed the Mountains"

On the morning of 10 October 1966, when a passenger train full of Red Guards was heading towards the bridge, Cai, who was on sentry duty, discovered a log lying on the rails, ahead of the train. At the critical moment, Cai rushed forward, seized the log and tried to jump aside. The train, whizzing past, knocked him down. While thousands of Red Guards and the bridge were saved, Cai died a hero’s death. 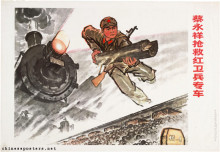