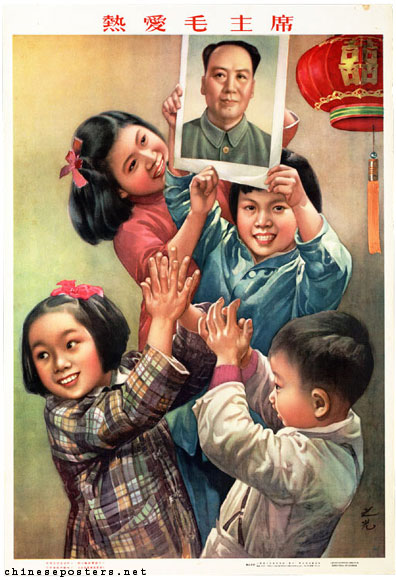 The image is meant to refer to the ‘nationwide jubilation’ after the news that Mao had been elected as Chairman of the People’s Republic at the First Session of the First National Congress of the PRC on on 15 September 1954.
The text below left reads:
The news spread that the leader was elected, a deafening sound of gongs and drums was heard on the street,
Where people were holding high the portrait of the leader shouted, long live Chairman Mao, long long live!
Lingxiu dangxuan xixun chuan, jie shang luogu xiang liantian, huaxiang qi huanhu, Mao zhuxi wansui wan wan sui! (领袖当选喜讯传，街上锣鼓响连天,高举画像齐欢呼，毛主席万岁万万岁!)