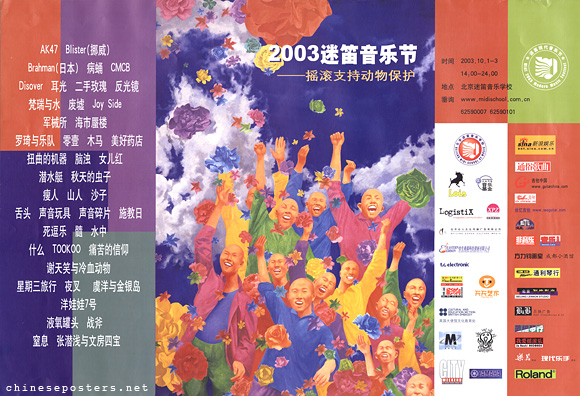 The poster features a number of smirking, baldheaded men, a theme made famous by "Political Pop/Cynical Realist" artist Fang Lijun (方力钧) in the late 1980s and beyond.

The Midi Music Festival, sometimes also called Midi Modern Music Festival or simply Midi Festival (迷笛音乐节) is among China's largest rock music festivals and is hosted by the Beijing Midi School of Music. Since its inauguration in 1997, it has been held yearly in Beijing during the May Day holiday (May 1–3), except in 2003, 2004 and 2008, when it took place in October. In 2020 and 2021, it was cancelled due to COVID. The festival currently is held annually in four cities: Beijing, Shanghai, Suzhou and Shenzhen.