The Three Rules of Discipline and the Eight Points for Attention 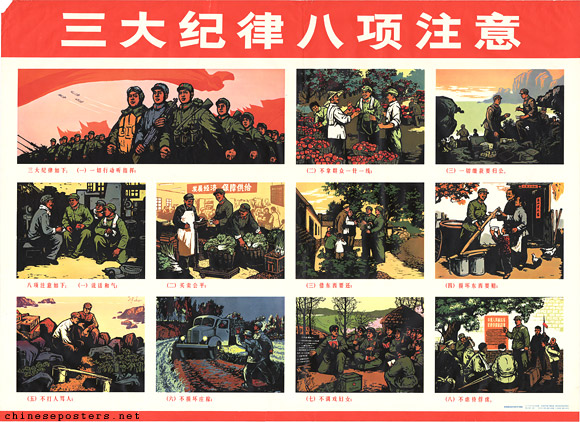 "The Three Rules of Discipline and the Eight Points for Attention'' were rules of discipline for the Chinese Workers' and Peasants' Red Army, drawn up by Mao Zedong and others during the Second Revolutionary Civil War (1927-1937). They varied slightly in content at different times and in different army units. In October 1947, the General Headquarters of the Chinese People's Liberation Army issued a standard version as follows:

The Three Rules of Discipline:

(1) Obey orders in all your actions.

(2) Do not take a single needle or piece of thread from the masses.

(3) Turn in everything captured.

The Eight Points for Attention:

(3) Return everything you borrow.

(4) Pay for anything you damage.

(7) Do not take liberties with women.

(8) Do not ill-treat captives