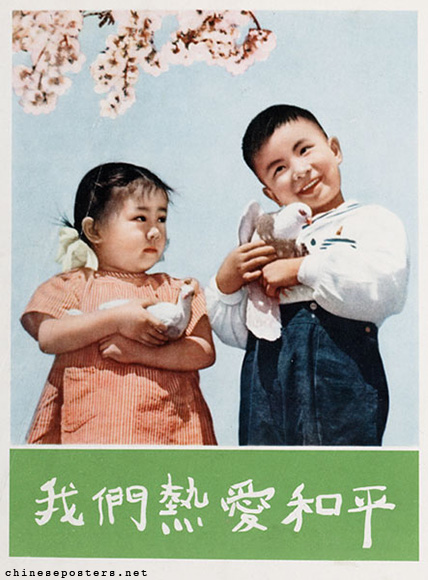 The photograph was taken by People's Daily art editor Que Wen in Beihai Park, Beijing, to illustrate Zhou Enlai's statement that 'We love peace, but we are not afraid of war'. First published in the People's Daily on 1 June 1952, the image was used on a poster that was printed in the millions and sent to Chinese volunteers fighting in North Korea to symbolize the purpose behind their struggles. It features in the background of several other posters, such as Report of a success on our nation's production frontline, 1953; Performing for the Volunteer Army, 1954; Let mothers do their work in peace, 1954.
This poster is in the collection only in digital format, scanned from 十年来宣传画选集 - Selection of 10 Years Propaganda Posters (Shanghai: Shanghai renmin meishu chubanshe, 1960).