We must liberate Taiwan 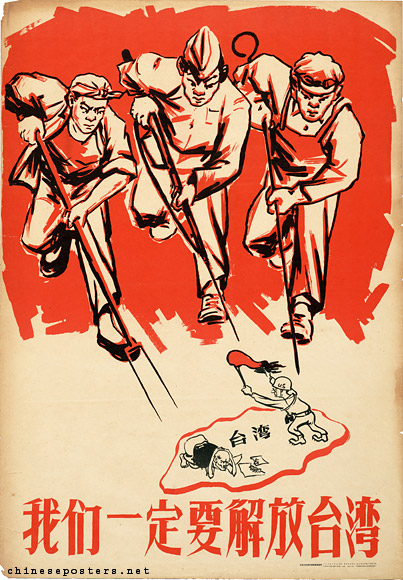 A peasant with a pitchfork, a soldier with a rifle and a steel worker with a puddling rod attack a crouching Chiang Kai-shek and an American soldier with a torch, standing on the island Taiwan.

Notes from https://www.dhi.ac.uk/chiangkaishek/:
"In a classic example of perspectival distortion (a common feature of Soviet propaganda), a half-naked Chiang tried in vain to shield himself from the united strength of Chinese soldiers, peasants and workers.
The poster was one of many images to be produced in the aftermath of the Second Taiwan Strait Crisis of 1958. Indeed, the Central Academy of Art and Design (whose artists collectively produced this image) were tasked with producing various images that could be used throughout the country for propagandistic purposes in this particular year. The academy provided many similar images for distribution through publications such as Yiding yao jiefang Taiwan xuanchuanhua cankao ziliao (Reference materials for propaganda posters for the liberation of Taiwan) (Beijing: Renmin meishu chubanshe, 1958)."