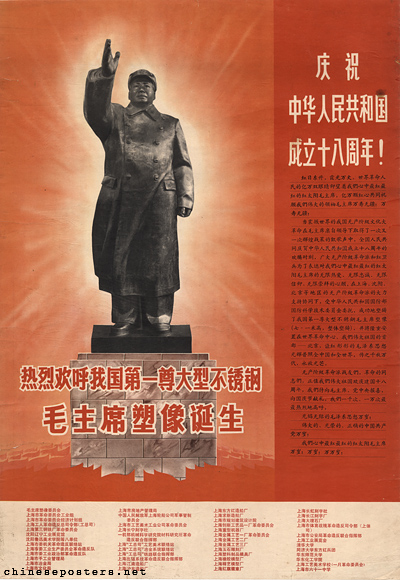 At the height of the factional struggles between Red Guard factions in the Spring of 1967, new ways of expressing a group’s revolutionary zeal were explored. On 4 May 1967, the first large-scale Mao statue appeared on the campus of Qinghua University. There, without support or funding from the central authorities, the Qinghua Jinggangshan Regiment was able to erect a statue within four weeks, involving some 5,000 students, teachers, and workers. Once this statue had been erected, it provided an example that spread widely and rapidly, if only because already existing statues such as this one were seen as models that merited scrutiny by special visiting delegations.

Despite these precedents, most factions sought some way to set themselves apart form all the others. The first aluminum statue, unveiled at the Beijing Mining Institute on 26 December 1967, Mao’s birthday, was a major innovation. Not only because of its material, but also because the numerology involved in casting it set it apart. According to Leese (2011, 156-7), the statue itself “... was 7.1 meters high [qi yi, referring to the date of the founding of the CCP, or to the alternative reading of 起义, ‘uprising’] ... The socket ... was exactly 5.16 meters, in remembrance of the 16 May Directive that ... presented the starting point of the Cultural Revolution. Yet the final clue was the combined height: 12.26 meters, an acronym for Mao’s birthday". This set the standard for the Mao-statues erected during the second wave of building by the newly formed revolutionary committees in mid-1968. 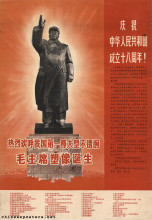 Warmly celebrate the completion of the statue of C… (1968) 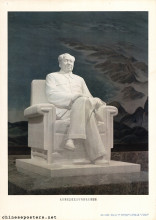 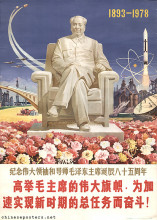 Raise the great flag of Chairman Mao who accelerat… (1978, December)