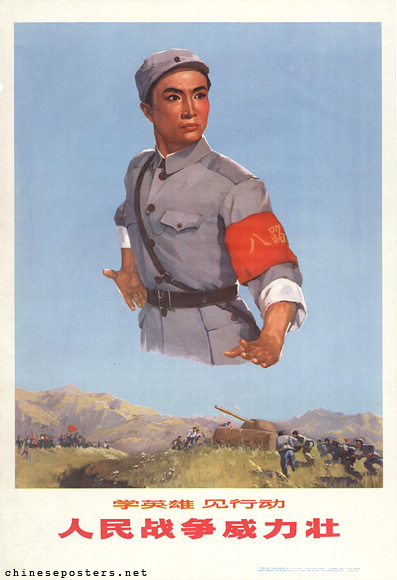 Study and Watch Heroes and their Behavior - The power of the people’s war is strong, 1974

The story of this model work unfolds during the Anti-Japanese War and takes place in the market town of Shajiabang (沙家浜), by Lake Yangcheng in Jiangsu Province. Shajiabang has become a center of guerrilla warfare against the Japanese after its liberation by the New Fourth Army. The company political instructor Guo Jianguang (郭建光) and seventeen other sick and wounded soldiers are recuperating in the town from their wounds. The Japanese troops, however, are bent on exterminating all New Fourth Army personnel from the area. Guo and his men have taken refuge in the nearby marshes.

After three days of fighting, Shajiabang is almost completely destroyed by the Japanese and Chinese puppet troops. A New Fourth Army vanguard, led by Guo, and militiamen, commanded by sister Ajing, a Party member and underground liaison officer who uses the Spring Teahouse as a cover, wipes out the enemy.