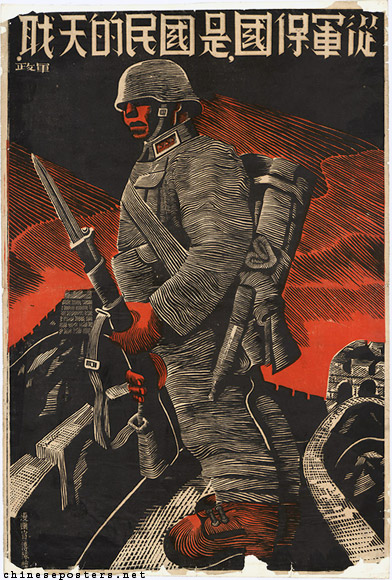 Joining the army to protect the nation is the people’s duty, ca. 1937

Attracted by the cheap labour force and vast resources, Japan invaded China in 1937. The conflict started with the Marco Polo Bridge Incident near Beijing, an exchange of shots engineered by the Japanese in 1937 that served as a pretext for Tokyo to launch a large-scale invasion. Later that year, on 13 December, Japanese troops entered the former Nationalist capital of Nanjing and unleashed a reign of terror, executing POWs and civilians, raping women by the thousands while burning and looting the city.

China had to become part of a Japanese designed ‘East Asian Economic Co-Prosperity Sphere’. To that end, Japan already much earlier had started a policy of encroachment. In September 1931, the Guandong Army had launched the Manchurian Incident and began the occupation of Northeast China; the following year it installed Puyi, the last and former emperor of the Qing dynasty, as chief executive (he was enthroned in 1934), and a state was formed; all real power in national defense and government were held by the Guandong Army, and Manzhouguo (Manchukuo) thus became the military and economic base for the Japanese invasion of the Asian mainland.

The more I fight, the stronger I become - The more the enemy fights, the weaker he becomes, ca. 1938

Millions of people all of one mind vow to exterminate the Japanese enemy, ca. 1937

At the time the war started, the bulk of China was controlled by the Nationalist Party (Guomindang, 国民党, old transcription: Kuomintang), which initially was especially strong in the urban areas along the Eastern seaboard but moved inland and established its wartime capital in Chongqing. The Communists had entrenched themselves in "liberated areas" in the countryside, including Yan’an in the Northwest. The military conflict became known as the "Second Sino-Japanese War" (the First Sino-Japanese War was from 1894 to 1895), or the "War of Resistance Against Japan" (抗日战争). It marked the beginning of the Second World War in the Pacific, ending only with the surrender of Japan in 1945. The war cost at least 20 millions of lives, although the exact number of casualties is still heavily debated. It was a cruel war, including targeted bombing of civilians, murder, torture, human experiments and rape, and the use of chemical and bacteriological weapons.

As long as the Japanese dwarves have not been vanquished, the struggle will not stop, ca. 1937

Both the Japanese and the Chinese used posters to try and influence the Chinese population. The Japanese tried to justify their military presence, to make it clear that any resistance was useless and to warn the population against co-operating with either the Nationalists or the Communists. Both the Communists and Nationalists tried to mobilize the population to resist the common enemy, Japan. The posters shown here, published by the Nationalist government, are extremely rare. Posters produced in the liberated areas under Communist control are possibly even rarer; in many cases, only a single copy of such posters ever existed.

Members of the revolutionary army, let the nation resist the foe ..., ca. 1937

Everbody must hate the enemy, defenses must be constructed step-by-step, ca. 1937

No compromise, no surrender, fighting to the end, for the ultimate victory, ca. 1937

The army and the people cooperate to defend South China, ca. 1937

The compatriots in the military region have lost home and hearth..., ca. 1938

Quite a few of the Nationalist posters feature wounded soldiers. They are praised for their sacrifice, encouraged to get well soon and given time to heal - in order to go back to the front.

The wounded can recuperate peacefully, ca. 1937

This life will not die, this determination will not let up, ca. 1937

Discipline is the lifeblood of the army, wounds are the glory of the soldier, ca. 1937

Wounded soldier, you have paid the highest prize for everybody, ca. 1937

I will not let my comrades down who have already fallen, ca. 1937

The posters below are pro-Japanese. The first, in all likelihood published in the Japan-dominated puppet state of Manzhouguo, and the second take aim at the Communist Party. The third, designed and produced in Japan, praises the exploits of the Japanese army and the support of the home front.

Look! Look! The cruel injustice of the Communist Party, ca. 1938

Heroes and episodes from the "War of Resistance" feature prominently in the propaganda of the People’s Republic.

The old militia member tells stories from the War of Resistance, 1973 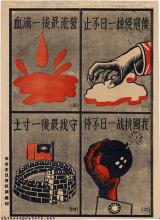 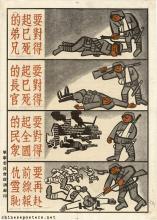 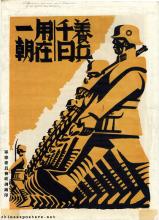 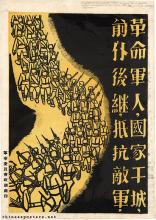 Members of the revolutionary army, let the nation… (ca. 1937) 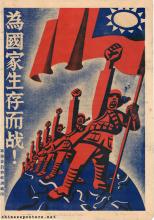 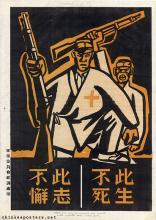 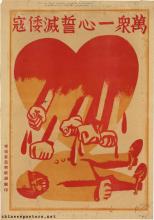 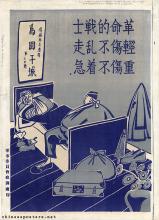 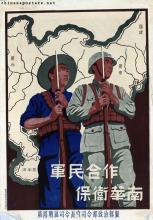 The army and the people cooperate to defend South… (ca. 1937) 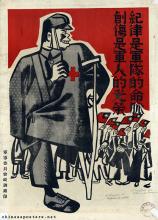 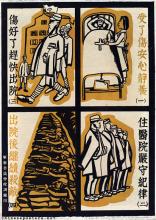 The wounded can recuperate peacefully (ca. 1937) 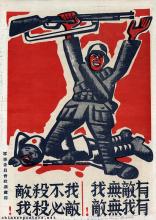 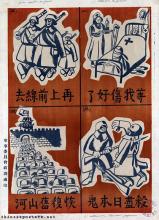 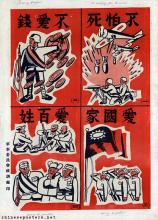 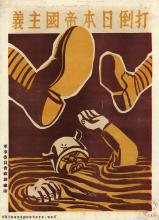 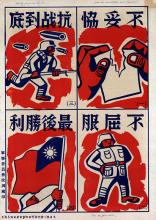 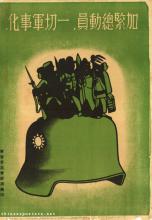 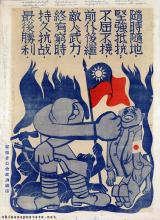 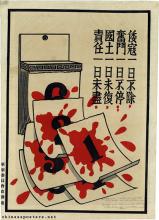 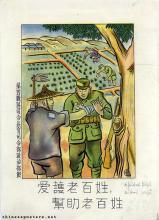 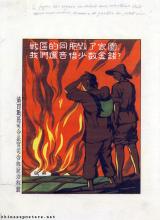 The compatriots in the military region have lost h… (ca. 1937) 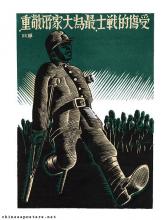 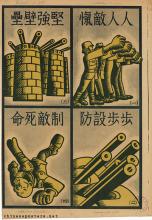 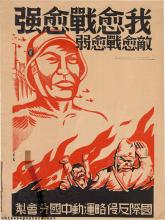 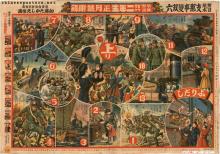 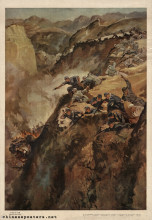 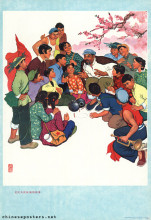 The old militia member tells stories from the War… (1973, July)

We will always remember (1994, December)