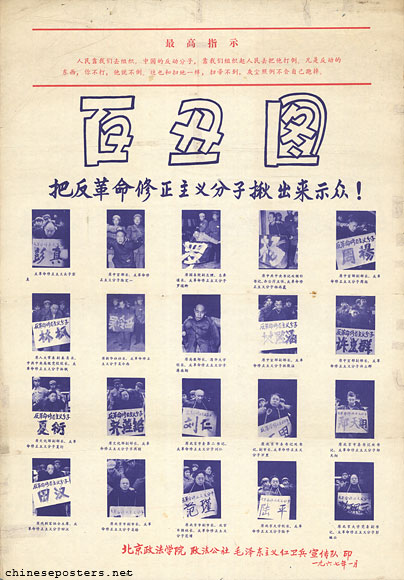 Especially in the early phase of the Cultural Revolution, people are 'dragged out' by Red Guards and forced to wear caps, collars or placards identifying them as 'monsters', 'demons' or 'clowns' during humiliating public meetings.

The red text above:
"Supreme command
It is up to us to organize the people. As for the reactionaries in China, it is up to us to organize the people to overthrow them. Everything reactionary is the same; if you do not hit it, it will not fall. This is also like sweeping the floor; as a rule, where the broom does not reach, the dust will not vanish of itself."
This quotation is from the Quotations from Chairman Mao (Mao zhuxi yulu 毛主席语录), chapter 2, Classes and Class Struggle, originally published in "The Situation and Our Policy After the Victory in the War of Resistance Against Japan" (August 13, 1945), Selected Works, Vol. IV, p. 19.