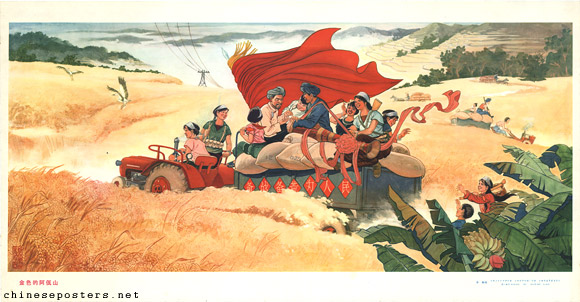 The characters on the side of the cart read "Prepare for struggle, prepare for famine, for the people" (Bei zhan, bei huang, wei renmin 备战、 备荒、 为人民). The slogan was proposed by Mao Zedong in 1965.

Awa Mountain, in Ximeng county, Yunnan Province, is known for its "Cloud Sea" (云海), a natural phenomenon occuring in winter and spring, when the heat of the lowlying river meets with high altitude along the mountains, causing the inverse temperature below to form a thick cloud sea, covering the mountain valley. Instead of clouds, this poster shows Awa Mountain covered in clouds of golden grain.