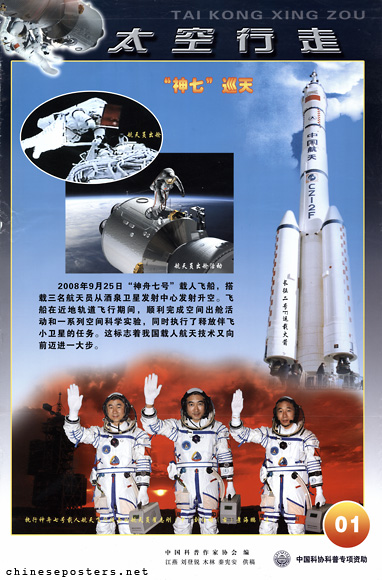 On 27 September 2008, Zhai Zhigang (翟志刚) embarked on the first Chinese space walk ever. Marking the highlight of only the third manned space flight undertaken by China since the first manned flight in 2003, the crew of the Shenzhou 7 (神州7号) showed that the Chinese space program had been proceeding apace. The Chinese plans included a permanent space station, the Tiangong (天宫, Heavenly Palace) functioning by 2020, as well as crewed expeditions to the Moon. Yang Liwei, China’s first taikonaut, ventured in 2007 that establishing a permanent base on the Moon was crucial to realize a mission to Mars and possibly even further into space. The importance of space exploration was underscored during the Chinese 1 May celebration in 2015, when special media programs were broadcast that revolved around the space program and its importance

The mission took off on 25 September, from the Jiuquan Satellite Launch Centre in Gansu Province. Zhai’s 22-minutes’ venture outside left the other two crew members, Liu Boming (刘伯明) and Jing Haipeng (景海鹏), on board. Liu assisted from inside the depressurized orbital module, while Jing remained in the pressurized re-entry module. The three landed safely in Siziwang Banner, Inner Mongolia, on 28 September.