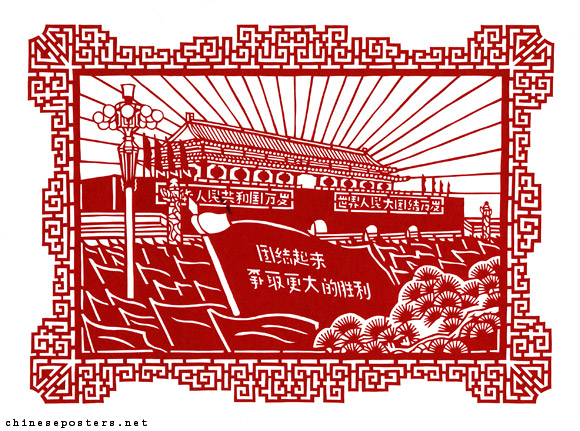 Papercutting (jianzhi, 剪纸) is a traditional Chinese folk art with a history of at least 1,500 years. Papercuts were familiar to and enjoyed by peasants, especially in North China - and thus in Yan'an, the Communist power base from 1935 to 1947. The Communists started using papercuts for propaganda purposes during their stay there. Instead of traditional deities, astrological or mythological figures and auspicious symbols, contemporary motives were introduced to propagate the Communist ideology and to raise support for the struggle against the Japanese occupation. Papercuts with political motives continued to be produced in the early years of the People's Republic, during the Great Leap Forward, and, on a larger scale, during the Cultural Revolution.

I am a little commune member

Paper-cuts of Yangchow (scenes in and around Shaoshan)

Sacred Places of the Revolution

Here we show sets of papercuts from the 1970s to the early 1980s. They are hand-made, with scissors or small knives, but have been produced in large numbers. These sets were distributed through the state-run bookshops and Friendship Stores. As the covers show, they were also aimed at foreign customers (Overseas Chinese, tourists to China and sympathizers abroad). The exact years of publication are not known.