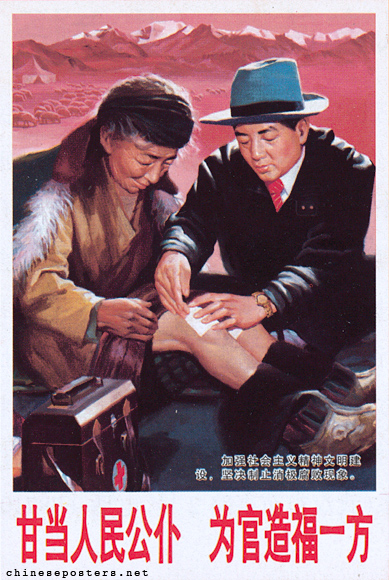 This poster is in the collection only in digital format. It is part of a 6-poster series with the title 讲文明树新风宣传画 (Jiang wenming shu xinfeng xuanchuan hua, Talk about civilization and create a new style propaganda posters).

It shows Kong Fansen (孔繁森, 1944-1994), who was born in Liaocheng, Shandong Province. Kong worked as a cadre in Tibet from 1979 to 1981 and from 1988 to 1994. Kong is usually depicted wearing a wide-brimmed hat. According to an official hagiography, "[H]e lived a simple life, was renowned for his honesty, never using his official position for personal gain. On the contrary, he often spent his own meager salary to help Tibetan orphans or buy medicine for the sick". He died in a car crash.