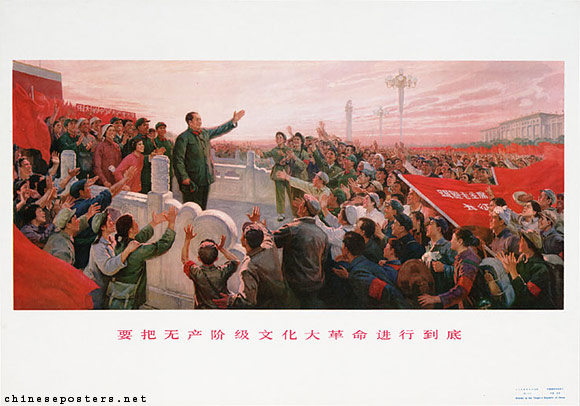 Mao meeting Red Guards, crossing the bridge from the Forbidden City towards Tian'anmen Square. This painting was made for the 1972 National Art Exhibition in Beijing, by a group of professors from the Central Academy of Fine Arts. To create the painting, some of the artists were brought back from the labour camps they had been sent to after being attacked by Red Guards in 1966-1967. The work can be seen as a more polished version of the painting/poster from late 1967-early 1968, Chairman Mao's heart beats as one with the hearts of the revolutionary masses, on which Mao is accompanied by Jiang Qing, Lin Biao, Zhou Enlai, Chen Boda and Kang Sheng in a similar scene.