The more we study, the brighter our hearts will become 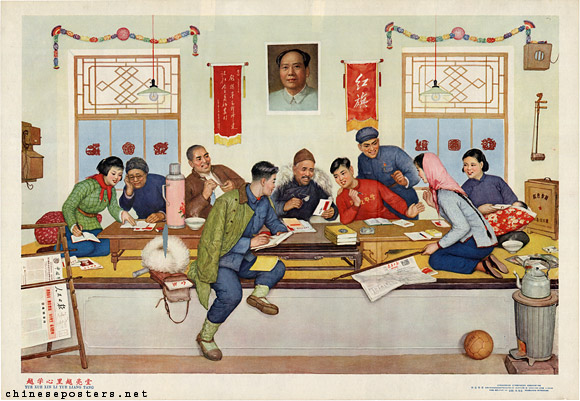 A familiar theme in Chinese propaganda posters: communal study. The style of the design is a good example of the revolutionary realism and revolutionary romanticism that was advocated in the second half of the 1950s. This scene is situated in the countryside of North-China (indicated by the kang, the raised heated platform). Representatives of all generations of a model unit (indicated by the red banners on the wall) are gathered to read political treatises and newspapers. The portrait of Mao hanging on the wall indicates that we are in the middle of the Socialist Education Movement, which was organized by Mao to inoculate the peasantry against the 'sugar-coated bullets of capitalism' to which they fell victim under the more pragmatic economic policies under Liu Shaoqi after the famines that followed the Great Leap Forward. We see the trappings of the good life under socialism: electric lightning, a telephone, a radio, etc. But there's also room to play (a football) and opportunities for culture (the erhu hanging on the wall).