Chairman Hua at the parents' meeting of No. 166 Middle School 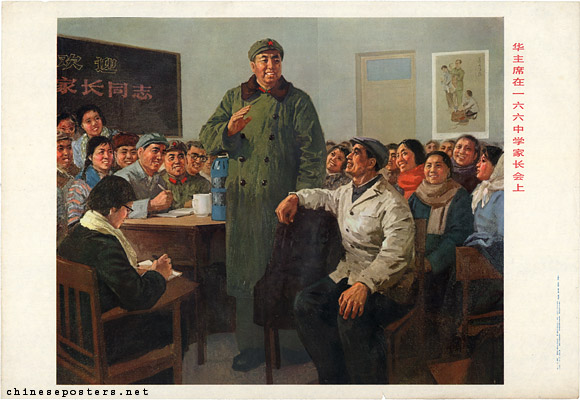 According to a Beijing Daily (北京日报) report, on 21 March 1974, the then-Vice Premier of the State Council Hua Guofeng saw the notice that the No. 116 Middle School was holding a parent meeting at 6 pm. He immediately joined his daughter Xiaoli (小莉) who was studying at the school.

The poster in the background: Quan Tai'an, Seeing off the children to work the land, ca. 1974

The Hua Guofeng cult
Hua Guofeng at the parents' meeting of No. 166 Middle School
Up to the mountains, down to the villages (1968)
China
poster
Chinese
propaganda
1977
school
classroom
blackboard
华国锋
Hua Guofeng
poster-in-poster
thermos
teacup