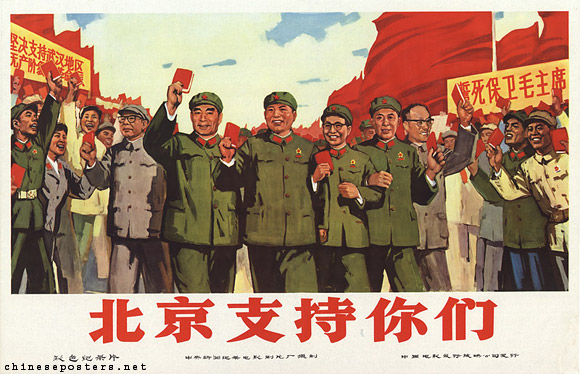 A very rare example of a poster with a group of prominent Cultural Revolution leaders without Mao. The man in the center is Wang Li (王力, 1922-1996), who played an important role in the early stages of the Cultural Revolution. In July 1967, he was attacked and arrested by groups opposing the Cultural Revolution's radicalism during the so-called "Wuhan Incident". Wang was rescued and evacuated by plane to Beijing, where a "glorious return" was prepared for him by Zhou Enlai. The event was filmed, but the documentary movie advertised by this poster was shelved when Wang Li fell from Mao's grace later that year, was arrested and put in prison.
The man between Jiang Qing and Kang Sheng is probably Xie Fuzhi (谢富治, 1909-1972), also involved in the "Wuhan Incident".