32,000 miles that make us feel proud and elated 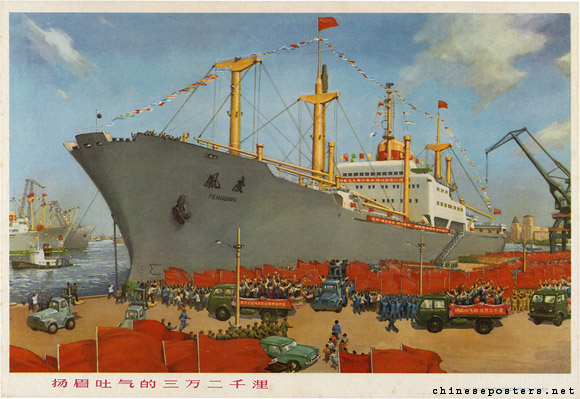 A ship in the Shanghai harbor; the characteristic buildings on the Bund can just be seen on the right. The ship is the Fengqing (风庆), a Chinese designed and built ocean-going freighter, returning to Shanghai harbour after its maiden voyage to Europe.

The Fengqing became the subject of a campaign by Jiang Qing and her allies to attack Zhou Enlai. Zhou was charged with "a slavish comprador philosophy", supposedly preferring the import of foreign technology to developing technology in China. In reality, Zhou had stimulated the development of China's shipbuilding industry, while allowing for the purchase of some foreign ships if and when China needed more than it could produce.