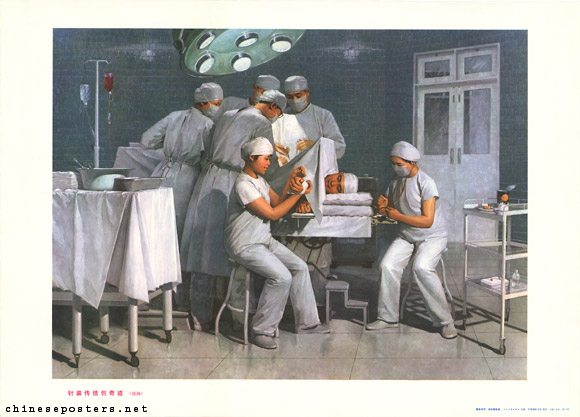 Tang Muli, born in Shanghai and educated in painting, was 'sent down' to work on a dairy farm in the Shanghai suburbs during the Cultural Revolution. In his spare time, he sketched and painted. His first oil painting, Milk Maid, was submitted to be juried for the 1972 National Exhibition and met with considerable success. Tang now was classified as a peasant artist.
In 1972 he was commissioned to make a painting about acupuncture's usefulness as an anesthetic in surgery. Tang painted mostly in the evenings, after his day job of shovelling fodder.
His sketches and ideas were discussed in a group with a Party representative, a doctor and a worker. Discussions centered on the choice between propaganda value and professional authenticity. In Tang's painting the main figure (the most politically correct worker on the hospital staff) is not wearing the obligatory surgical mask, to show her smile.
On the other hand: no Mao buttons, propaganda posters or slogans were introduced into the operating room as these were not allowed in there in reality. The final version of the painting was well received, exhibited in the 1972 National Exhibition in Beijing, and reproduced as a poster.