A yangge team arrives at the Date Garden 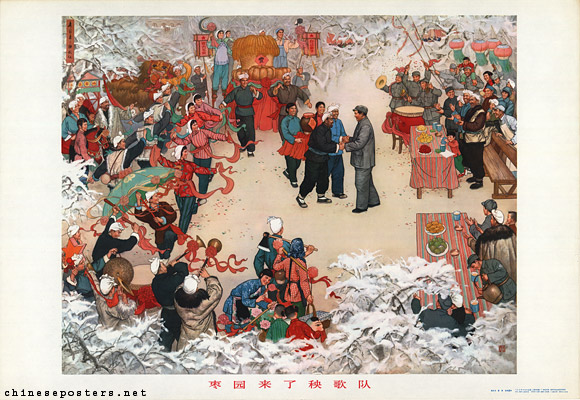 "The yangge (literally 'rice-sprout song') is a popular traditional folk dance performed in the open air in rural north China. It is a performance that combines spirited dance, garish costumes and loud music to form a colorful blend of rhythmic movements. The dance was closely associated with New Year’s rituals and celebrations, intended to dispel evil and ensure a bumper harvest in the coming season. The dance troupe is led by a leader known as santou (Umbrella Head), who holds an umbrella to direct the movement, and consists of a few dozen to more than 100 dancers, with men playing women’s roles. They are accompanied by drums, gongs, cymbals and suona (a shawm-like instrument), and as well as dancing incorporate farcical acts played by clowns and erotic moves."