Down with Yan Hongyan! Down with Li Jingquan! 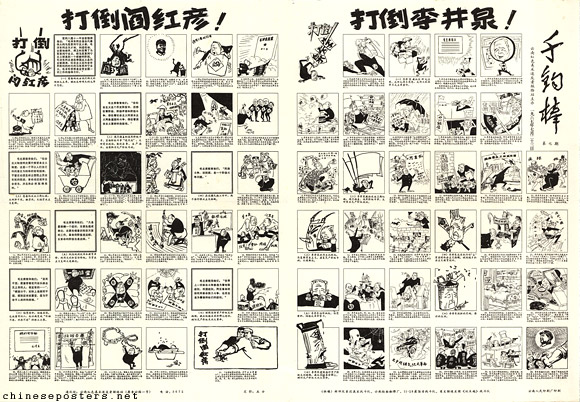 Yan Hongyan (阎红彦, 1909-1967) was a native of Wayaobao, Anding (now Zichang) County, Shaanxi Province. He joined the CCP in 1924 and participated in the Northern Expedition. After the founding of the PRC, he was the vice governor and vice secretary of CCP's committee in Sichuan Province. He was made a general in 1955. In August 1959, he became the No. 1 secretary of the CCP committee in Yunnan Province, No.1 political commissar of the Kunming Military Region, and Secretary in the Secretariat of the CCP Southwest Bureau. In December 1963, he became the chairman of the Yunnan commission of Chinese People's Political Consultative Conference, and also an alternative member of the 8th CCP Central Committee. He ran afoul of the Maoist leadership in Beijing shortly after the beginning of the Cultural Revolution. He was brutally persecuted by the "Gang of Four" and committed suicide in Kunming on 8 January 1967. In January 1978, the CCP Central Committee rehabilitated his unjust case, and held a cremation ceremony at the Babaoshan Revolutionary Cemetery in Beijing.