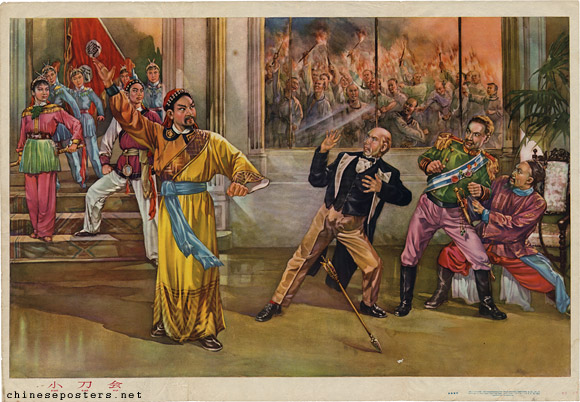 The Small Sword Society (Xiaodao hui, 小刀会) emerged during the Taiping Rebellion (1850-1864). Made up of people from Guangdong and Fujian, it was a secret society organized along kinship and native-place links.

After the fall of Nanjing, when the Taiping Armies threatened Shanghai in 1853, the local circuit intendant (daotai 道台) Wu Jianzhang (吴健彰) called upon his fellow Cantonese and Fujianese, unemployed dockworkers, to help defend the city. The Shanghai daotai served as something of an interface between the Qing and the foreign powers. However, Wu was unable to pay his impromptu army. The disgruntled mercenaries turned to another Cantonese, Liu Lichuan (刘丽川) who headed a secret society, the Small Swords, a branch of the Triads, in Shanghai. Another chapter of the Small Swords had successfully attacked Xiamen previously. Under Liu, and cooperating with other secret societies active in Shanghai at the time, they staged a coup.

On 7 September 1853, when the gates to Shanghai’s Chinese city were open for the Autumnal Sacrifice to Confucius, some 600 men rushed in and stormed the government buildings and treasury, seizing control of the Chinese city. During some 17 months, the Small Swords ruled the Chinese part of Shanghai from their headquarters, located in Yuyuan (豫园, Yu Garden). They reached an agreement with the foreign nationals residing in Shanghai, trading with them and providing protection against the Taipings.

It is accepted in China that the Small Sword were a peasant-led anti-imperialist movement, as the poster suggests as well. However, it was commanded by people working as traders, and largely made up of unemployed dockworkers and longshore men. Moreover, it had sought and obtained foreign military support, as the British the Americans both sold weapons to them. Small Swords leaders often had worked for foreign firms and they continued their collaboration.

In the image, the yellow-robed person in the center represents Liu Lichuan, while the Chinese official cowering to the right should be Wu Jianzhang. Liu and others behind him wear red headbands, which were used to indicate membership of the insurgents.

Jonathan Chappell, ‘The limits of the Shanghai bridgehead: understanding British intervention in the Taiping Rebellion 1860–62’, The Journal of Imperial and Commonwealth History 44 (4) (2016), pp. 533-550 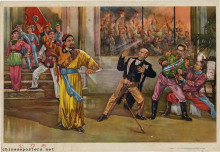