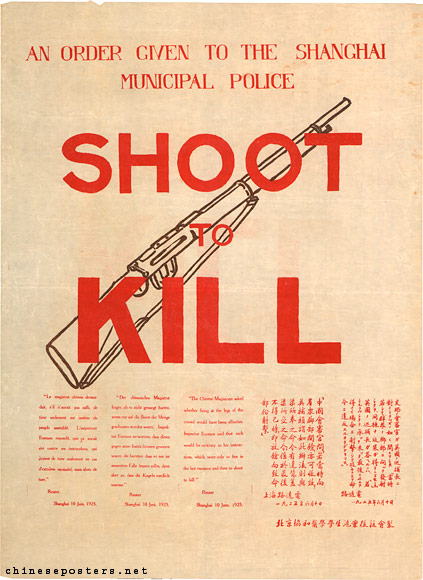 In the early 1920s, China was seething with progressive movements emerging out of the May Fourth Movement of 1919. Around 1924, organizers from the CCP and the GMD joined forces with workers to set off a strike wave. In 1925, nationwide anti-imperialist sentiments were added to an already explosive mix of restiveness.

These elements coalesced in the May 30 Incident that gave rise to the May 30th Movement (五卅运动, Wusa Yundong) of 1925. It all started in early 1925 in Shanghai, when a Japanese-owned cotton mill replaced forty male workers with young female workers. This led to a strike in 22 Japanese factories that eventually ended. By mid-May, however, new strikes were called after a Chinese worker, Gu Zhenghong, was killed by a Japanese foreman. Tensions grew after 24 May, when a large public memorial service was held for the murdered worker. On 30 May, a Communist-supported demonstration made up of students was held on Nanjing Lu, in the middle of Shanghai’s International Settlement; demonstrations of any kind were officially prohibited here. In the ensuing skirmish, Chinese and Sikh police constables opened fire, killing thirteen and wounding over fifty. As a result, general strikes were called in Shanghai and Guangzhou; demonstrations and anti-foreign boycotts were organized in other cities; and from all over the world the British action was condemned. 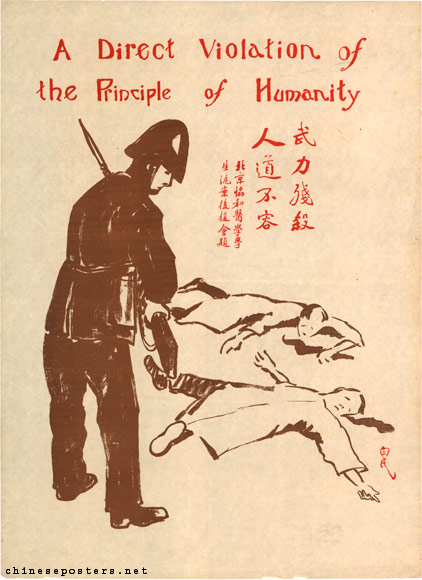 A Direct Violation of the Principle of Humanity, 1925

It should be pointed out that the death of Gu the factory worker did not lead to the same reaction as the deaths of the unarmed students. In the months following, student associations, merchant groups and workers’ organizations produced pamphlets and organized street lectures, rallies and memorial services. On 3 June 1925, for example, 30,000 Beijing students left their classes to demonstrate. During the summer, students and workers from time to time threatened to take over the streets of urban China. By August, the movement was suppressed at the national level.

The two posters shown above were issued by the Beijing Xiehe Yixue Xuesheng Hu’an Houyuanhui (Beijing United Medical Students Association in Support of the Shanghai Incident). They seem to have been meant to raise awareness and support among the international community in Beijing.

John Barwick, "Faith, Identity, and Nationalism: The Impact of the May Thirtieth Incident on China’s Christian Colleges", Past Imperfect, vol. 10 (2004), 45-58 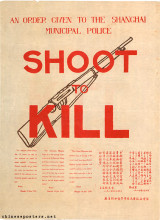 An order given to the Shanghai Municipal Police: S… (1925) 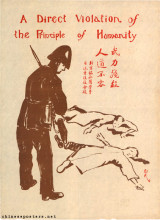 A Direct Violation of the Principle of Humanity (1925)