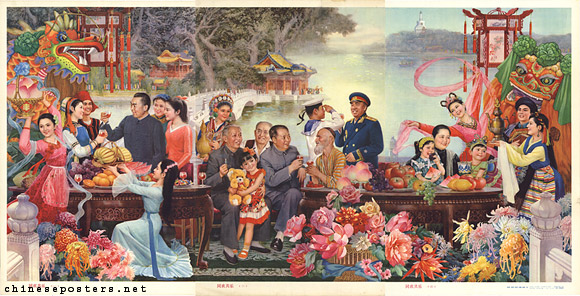 Kurban Tulum (1883-1975), here seen toasting with Mao, has been promoted by the CCP as a symbol of unity with the Uyghurs. In May 1958, he was chosen as part of the agricultural delegation to Beijing. The delegation reached Beijing on June 18, and they met with Mao. The monuments of him shaking hands with Mao stand at the center of Keriya and in Tuanjie Square of Hotan, the center of his area.
This imaginary banquet takes place in the Five Dragon Pavilion (Wulongting - 五龙亭), Beijing.