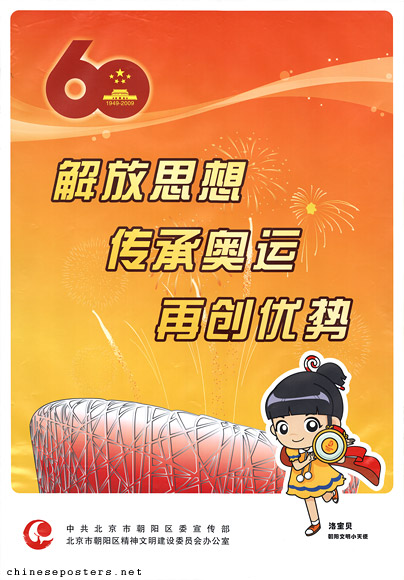 The poster, marking the 60th anniversary of the founding of the PRC in 2009, features Luo Baobei (洛宝贝), an original animation image independently designed and created by the Dayeman Wonderful Animation Company (大业漫奇妙动漫公司) in 2008. Luo Baobei "is a seven-year-old Chinese girl who lives in a modern and tidy apartment with her loving parents and grandparents. She is a carefree girl next door. She has no princess disease. She loves rock climbing, plays football, wears bibs and boots." She wears a small paper tongue whistle on her head. Every time she thinks of a good idea or a successful adventure, she will blow the whistle. This is her signature move.

The poster was designed by the Propaganda Section of the Chaoyang District CCP Committee of Beijing.