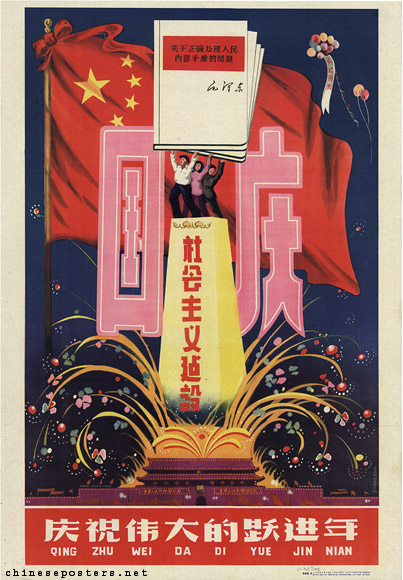 This 1958 version is the second edition of the poster, published in 30,000 copies. This added 25,000 copies to the first edition, a mere 5,000 copies, which was published slightly earlier in the same month.

The Mao essay the worker, peasant and soldier are holding aloft is a copy of his "On the Correct Handling of Contradictions among the People", a speech originally delivered on 27 February 1957, but only published in the People's Daily on 19 June 1957, after careful editing by Mao. It urged the people to speak out about mistakes made by the Party; those who did so eventually were prosecuted. This is the period of the so-called Double-Hundred Policy (1956-1957).

The text on the pillar reads "Socialist Construction".