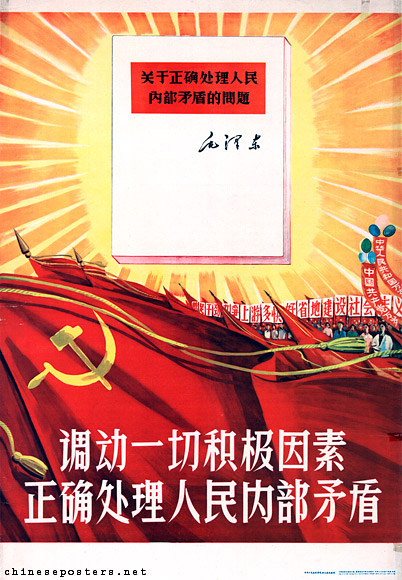 Bring every positive factor into play, correctly handle contradictions among the people, 1958

In Spring 1956, Mao Zedong proposed a new Party policy on science and culture. The policy became known as the "Double-Hundred Policy": literature and art were to be guided by the slogan "Let a hundred flowers blossom", and the sciences should follow the slogan "Let a hundred schools of thought contend". The movement was in part a response to the demoralization among intellectuals, who felt estranged from the Party and who subscribed to Hu Feng’s views that opposed totalitarian control of intellectual and artistic activity.

It would take until February 1957 before the intellectuals followed up on Mao’s calls and the Party’s exhortations to speak up. In that month, Mao delivered a speech, "On the Correct Handling of Contradictions among the People", in which he again spoke out on the policy. The policy was reaffirmed time and again in the following weeks. Emboldened by all this, many intellectuals and non-Party people finally spoke out. Their criticism quickly went beyond what was deemed permissible, at some point even questioning the legitimacy of Party leadership and the unassailable position of Mao himself. 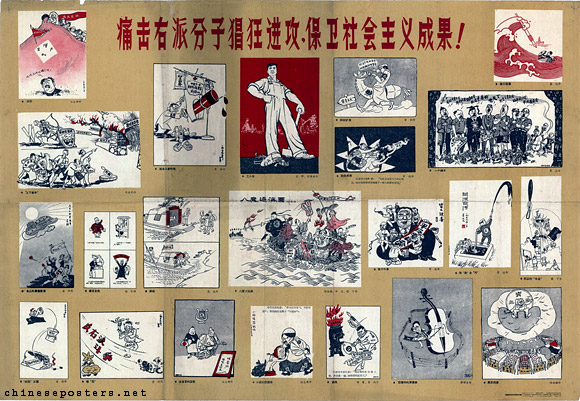 Savagely attack and hurt the rightists elements, to protect the results of socialism! 1957

By mid-May, a counter-movement was underway. All those who had spoken their minds were now made into the targets of an "Anti-Rightist Struggle", in which Deng Xiaoping, then Secretary-General of the Party, took on an active role. By Fall 1957, almost 5,000 ‘rightists’ had been uncovered. Many were imprisoned, and many others were banished to the border areas. Substantial numbers of ‘rightists’ had been rehabilitated before the Cultural Revolution started, but that movement caused many of them to be sent back to prison again.

In 1978, it was estimated that some 450,000 people had been labelled as rightists. By 1980, over 97% of them had been rehabilitated, and the Party had admitted that it had miscalculated the situation and had expanded the struggle beyond acceptable limits.

Richard Kraus, "Let A Hundred Flowers Blossom, Let A Hundred Schools of Thought Contend", in Wang Ban (ed.), Words and their stories -- Essays on the Language of the Chinese Revolution (Leiden: Brill, 2011), 249-262 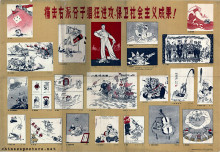 Savagely attack to hurt the rightists elements, to… (1957, October)