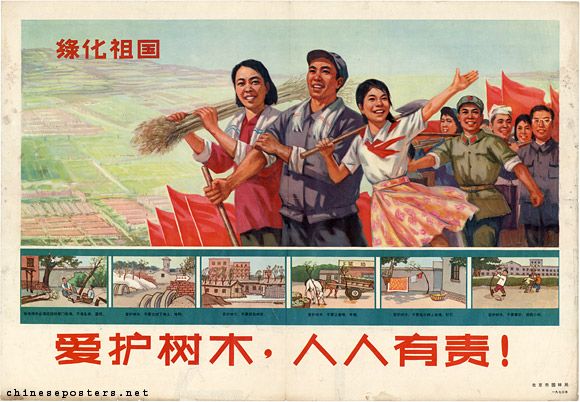 Make the motherland green - it is everybody's responsibility to take good care of trees!, 1973

Industrialization and economic development have had severe consequences on China's environment. China's rush into industrialisation after 1950 was undertaken with hardly any regard for the atmosphere, water supplies, forests or the countryside in general. Belching smokestacks were seen as proof of the success of socialist construction. Severe environmental pollution, including acid rain, thick smog, toxic waste, water pollution, and rapidly growing emissions of carbon dioxide, has been the result.

Although the negative environmental effects of industrialization were not addressed, the poster above shows that already in the 1970s, some attempts were made to create an awareness about the necessity of making China green. 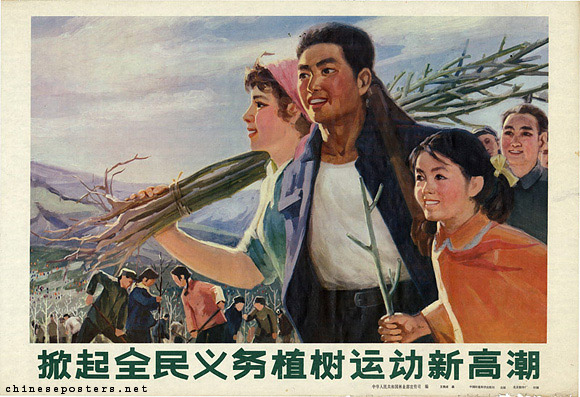 Start a new upsurge of the people's duty of tree planting movement, 1970s

Likewise, a poster from the early 1970s that called for the collection of scrap metal and other waste materials for recycling purposes must be considered a rarity. 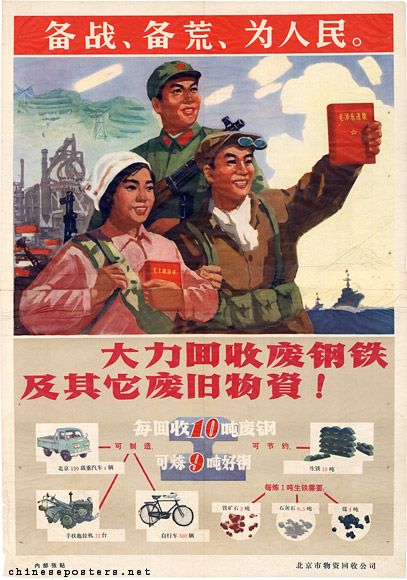 In the 1980s, the authorities became more aware of the impact of the environmental problems on the country's economic performance. They started a series of propaganda campaigns that were to educate the people in keeping their immediate surroundings clean. This was phrased in terms of maintaining a high level of personal hygiene as well as of social morality. 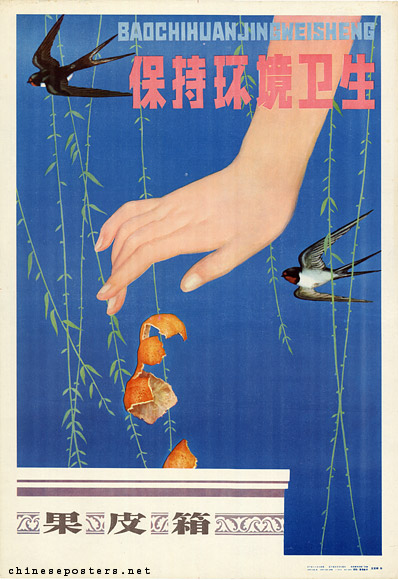 Protect the environment and hygiene, 1983 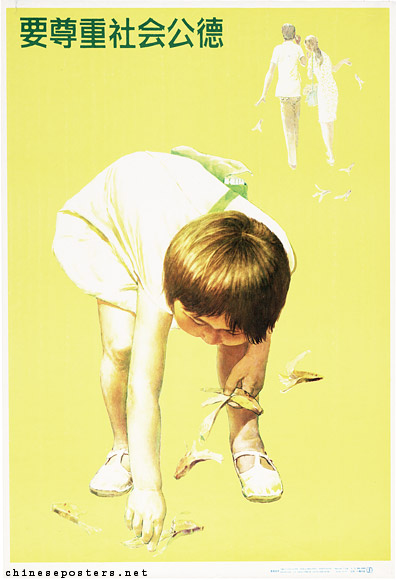 Social morality must be maintained, 1984

On a more general level, the aim was to make the people, both in the countryside and in the cities, more aware of the need to contribute to the "greening" of China, and to "beautify" the environment. 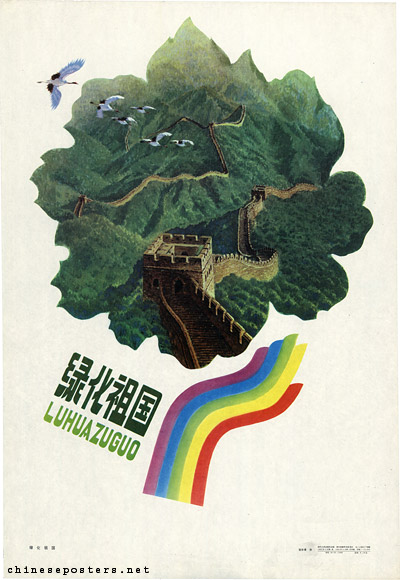 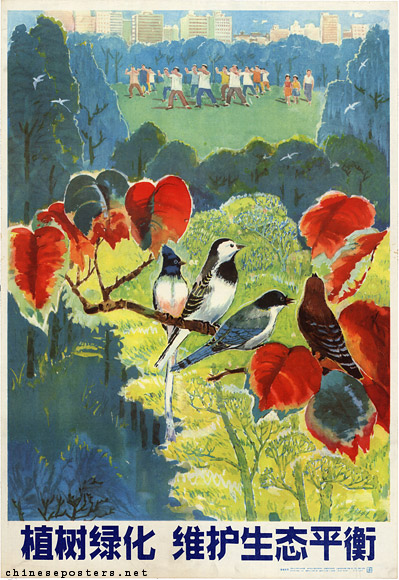 This contribution could take the form of protecting and maintaining plant- and wildlife. Over the years, the stress on protecting the environment has become an integral part of the various campaigns aimed at building Socialist Spiritual Civilization. 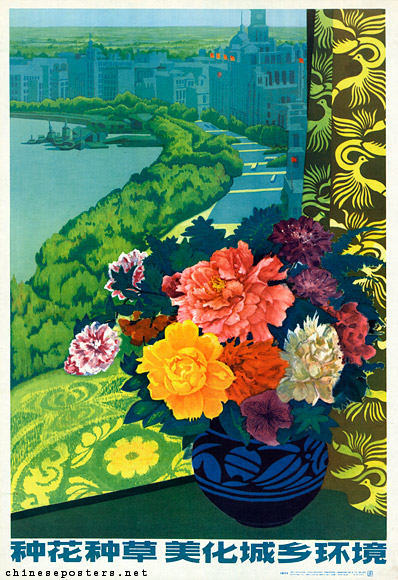 Plant flowers and grasses, beautify the environment of cities and villages, 1983 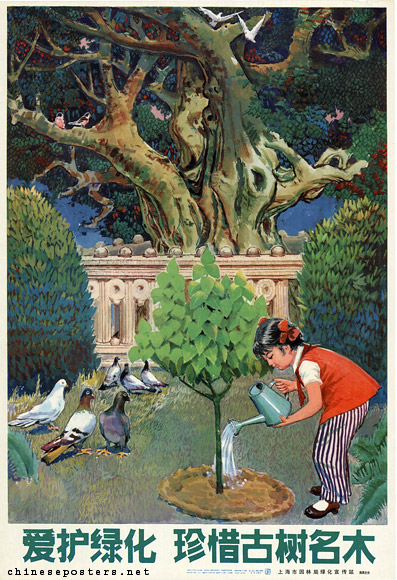 China is currently the world's second largest emitter of carbon dioxide. It already accounts for 10% of all greenhouse gas emissions. Similarly, pollution produced by coal burning has a direct impact on the level of acid rain, which, according to official estimates, affects 30% of the country. China generates three-quarters of its energy from coal. The pollution this causes is particularly severe in China's industrial cities. According to the WHO, Beijing, Shenyang, Xi'an, Shanghai and Guangzhou are on the top-10 of the world's most polluted cities. The air in Beijing is 16 times dirtier than it is in New York. The most polluted place in the country may be the Northeastern city of Benxi, which in winter cannot be seen by satellite reconnaissance for months at a time. 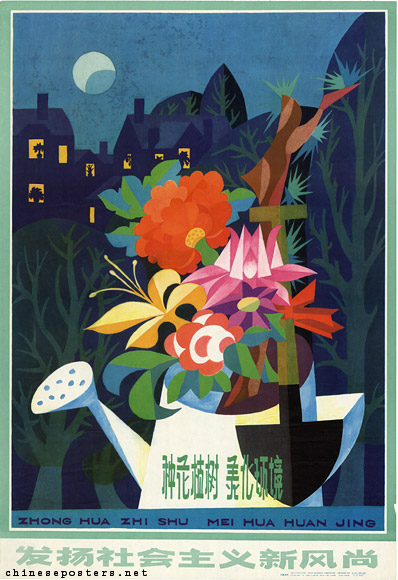 Plant flowers and trees to beautify the environment, 1982 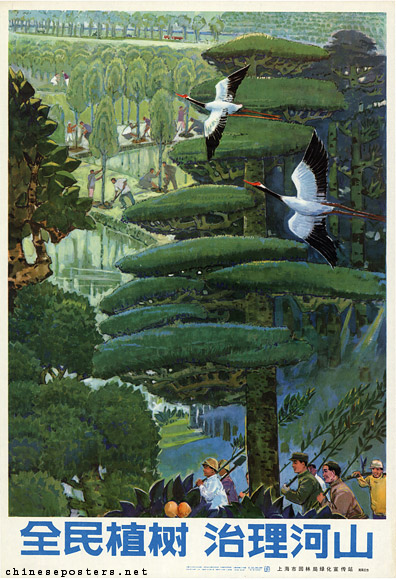 All the people plant trees, to regulate mountains and rivers, 1983

Another important environmental issue has been the loss of farmland due to the fast expansion of industries and cities: between 1980 and 1990, the arable land area declined by 0.37% per annum. When great floods occur, as they have done almost every year over the past decade, causing great devastation, the loss of topsoil is greater because of deforestation. The vehemence of these floods proves that China is suffering from grave economic and social problems as a consequence of environmental degradation. Moreover, inadequate rural fuel supplies continue to contribute to the massive deforestation. The government tries to counter this by embarking on large-scale afforestation projects. Regular tree-planting manifestations are employed to raise the awareness of the population.

Roughly half of all urban ground water resources, lakes and the seven major riverine systems are polluted because of a lack of sewers and waste treatment facilities; 85% of all Chinese cities are now short of clean water, and in the countryside only one Chinese in seven has safe drinking water. Thousands of kilometres of rivers are contaminated by industrial toxins, and one-third of the coastal fishing grounds are ruined by pollution. Only some 15% of waste water is treated. 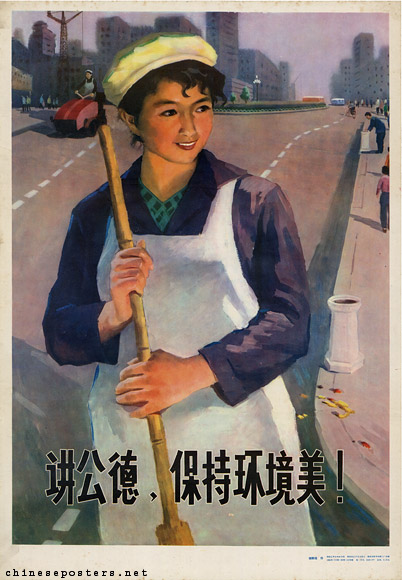 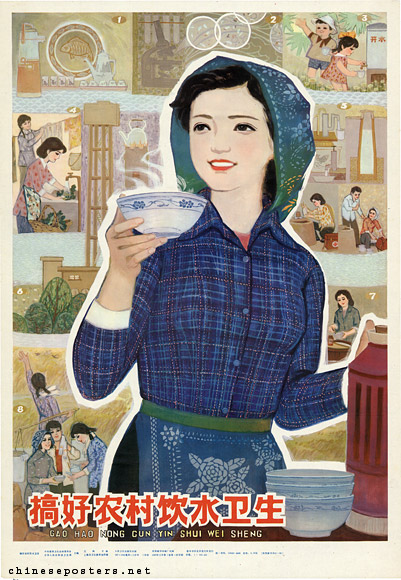 Make sure that rural villages get hygienic drinking water, 1983

China acceded to a number of international agreements to counter environmental pollution. In 1992, the government signed the Climate Change Framework Convention at the UN Conference on Environment and Development, which was ratified in 1993. China is also a signatory to the Montreal Protocol on Substances that Deplete the Ozone Layer. 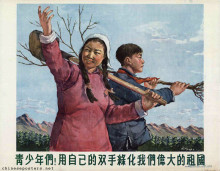 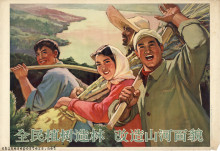 Everybody plants trees and creates forests to chan… (1966, May) 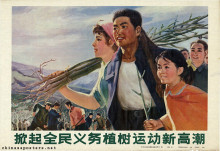 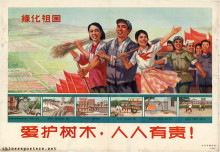 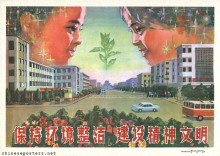 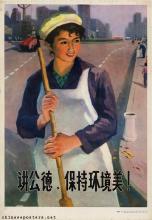 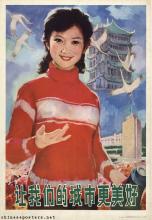 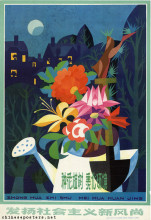 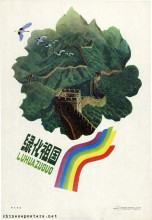 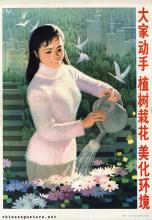 Everybody gets to work to plant trees and grow flo… (1983, January) 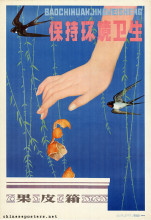 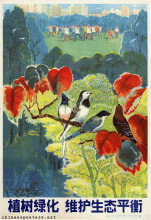 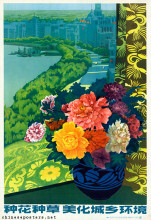 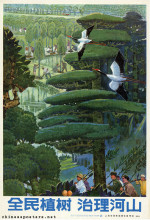