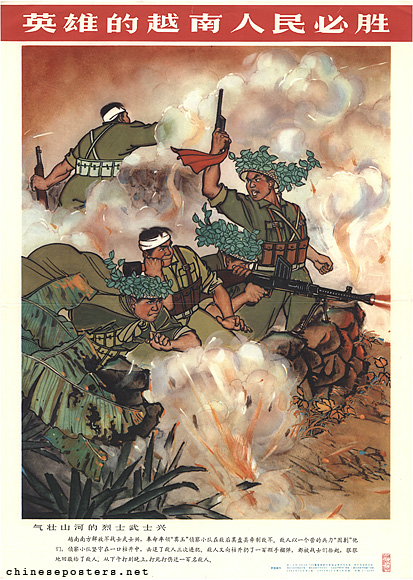 From the series The brave people of Vietnam are sure to win (Yingxiong de yuenan renmin bisheng - 英雄的越南人必胜).

Translation of the text under the title: "The soldiers and warriors of Vietnam’s People’s Liberation Army have risen in the north, they received the order to lead the 'jade libation' reconnaissance troupe to pin down hostile forces behind the enemy’s line. The enemy 'encircled' the reconnaissance troupe with a battalion of armed forces and held them fast in a dried well, they prevented the enemy three times from invading. Then the enemy threw one hundred hand grenades in their direction, but all of them were fended off by the soldiers and fearlessly returned to the enemy. From afternoon until evening, around one hundred enemies have been killed or injured."