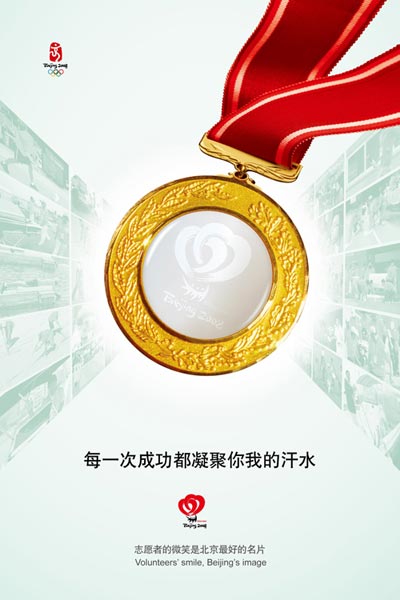 Every success is a result of our hard work, 2008

From the official press release of 1 August 2008:
"A set of five Beijing Olympic volunteer posters was unveiled recently. The posters showcase the passion, honesty, respect, sacrifice, happiness and teamwork of the volunteers, encouraging them to work hard and contribute to the Olympic effort.
The Beijing Olympic Committee commissioned the creation of these posters, each one of which advertises a different aspect of the Olympic volunteer mission. One shows the positive effects of a volunteer’s contribution, and conveys the idea of being "Champion of the Group." Another, with an image of a reel of film, tells the long history of volunteering for the Olympics in a single image. A dandelion in another poster demonstrates how far a friendly and sincere smile can spread, promoting harmony throughout the Games. The poster with the honeycomb connects the image of a volunteer with that of a honeybee; both must work diligently in their respective tasks to make something larger work. The fifth poster, depicting a Rubik’s cube, displays a final coming together of all aspects previously discussed: hard work, sincerity, contribution and historical spirit. Just like a Rubik’s Cube with its many sides, a good volunteer must integrate many aspects together to provide quality services.
These posters will be distributed en masse to Beijing’s volunteers."

Every experience is a beautiful memory, 2008

Every smile is the seed for a loving heart, 2008

Every sacrifice gives you the pleasure of maturing, 2008

Every cooperation shows the spirit of teamwork, 2008