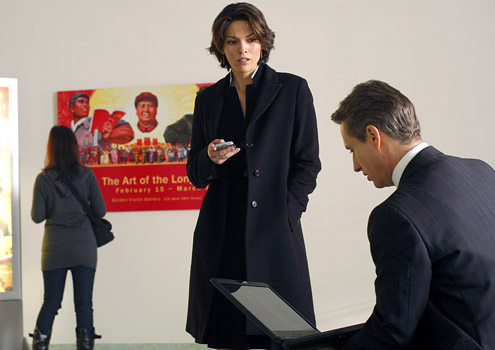 ’Take-Out’, an episode of the American TV crime series ‘Law & Order’, first broadcasted in the USA on 18 March 2009, starts when a man is found murdered in a park. At his last known address, detectives find Chinese books and a napkin from the (fictional) Sino-American Institute. They head for this institute, where an where an exhibition called ‘The Art of the Long March’ is being held. Reprints of posters from our collection were used to create this exhibition.
In the picture above, Assistant District Attorneys Connie Rubirosa (played by Alana De La Garza) and Michael Cutter (played by Linus Roache) visit the Institute. In the background, a poster announcing the exhibition can be seen.
The storyline of the episode can be found at http://allthingslawandorder.blogspot.com/2009/03/law-order-take-out-full-menu-recap-and.html. The picture was taken from http://lawandorder.wikia.com/wiki/File:Cutter_Rubirosa_Take-Out.jpg.