Fully engage in the movement to increase production..., 1965

Traditionally, Chinese political culture has used the arts to propagate ideals of correct behavior and thought. This practice did not stop with the establishment of the People’s Republic of China in 1949. On the contrary, propaganda art continued to be seen as one of the major means to explain and illustrate the ‘correct’ policies of the moment and the Communist Party’s visions of the future. Thus, it reinforced the messages passed on by other media such as newspapers, film and radio broadcasting. 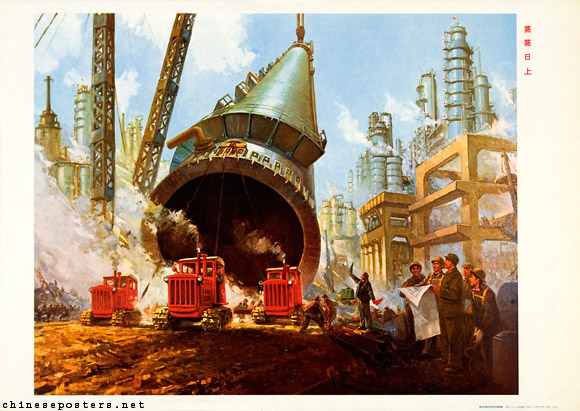 Through its complete control of both the artists and the publishing sector, the CCP was able to force its interpretation of reality and aesthetics on the population. As opposed to other images that were used traditionally to decorate the home with, propaganda came to dominate society and penetrated the lowest levels of social organization and cohabitation: the multi-colored posters could be seen hanging on walls in people’s houses and dormitories. In a society where not much else was available, their composition and visual content appealed to the spectators, while their political message was passed on in an almost subconscious manner. 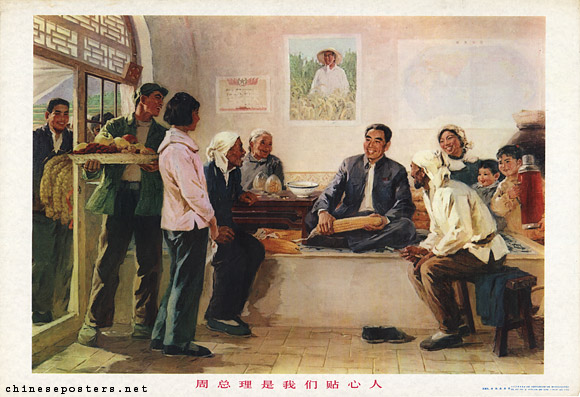 Premier Zhou is our close friend, 1977

Chinese propaganda art made extensive use of Socialist Realism, not only to show ‘life as it really is,’ but also ‘life as it ought to be,’ to instruct the viewers in the revolutionary development taking place ‘in the spirit of Socialism.’ This made Chinese propaganda art a type of artistic faction, a mixture of fact and fiction, stressing the positive and papering over anything negative. 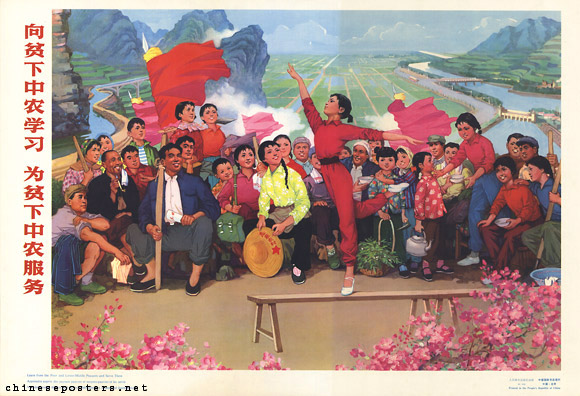 Learn from the Poor and Lower-Middle peasants and serve them, early 1970s

Particularly in the 1950s and 1960s, in the era of mass movements such as the Great Leap Forward and the Cultural Revolution, the posters were dominated by hyper-realistic, larger-than-life peasants, soldiers and workers in dynamic and often aggressive poses, proclaiming the universal applicability of Mao Zedong Thought, rooting out traitors and spies, struggling for the victory of socialism, achieving successes in industry and agriculture, or defending the nation. 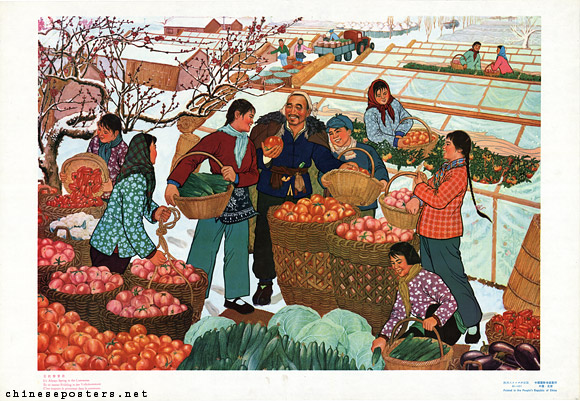 In order to portray every subject as a hero, the physical distinction between male and female bodies often disappeared, leading to figures with standard bodies, including absurdly big hands and feet, with slightly different, but usually stereotyped heads. 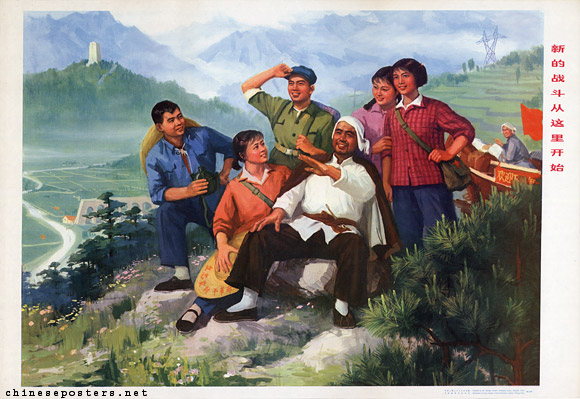 The decline in poster propaganda started in the early 1980s. Under Deng Xiaoping, who succeeded Hua Guofeng who succeeded Mao at the helm of the PRC, the economic rehabilitation of China became the CCP’s main consideration. Moreover, China opened itself to the West. Now, posters had to be designed to create public support for the new policies that made up the reform package. This had enormous consequences for propaganda. The themes became less heroic and militant, and more impressionistic, while bold colours were replaced with more subdued ones. The people did no longer have to struggle against class enemies, but were urged to adopt more cultured and educated lifestyles. Design techniques borrowed from Western advertising were employed again frequently. 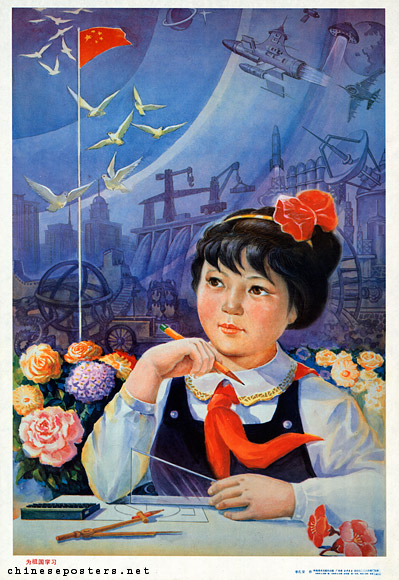 Studying for the mother country, 1986 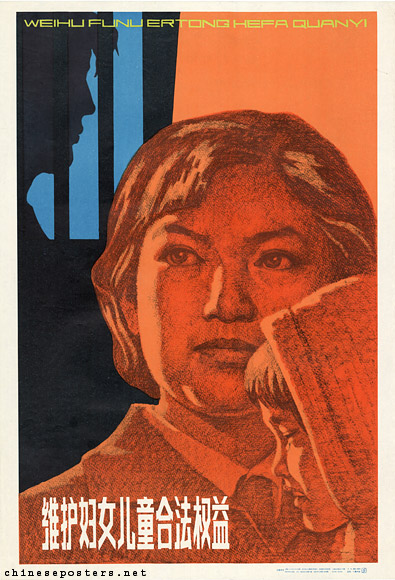 The use of science-fiction images, as a backdrop for the messages of economic development, gave the posters a truly utopian quality. Struggle was no longer the theme propagated, and the people were urged to be more careful, civilized, cultured and courteous instead. 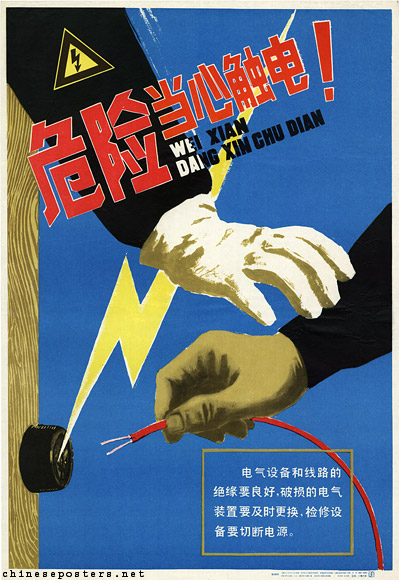 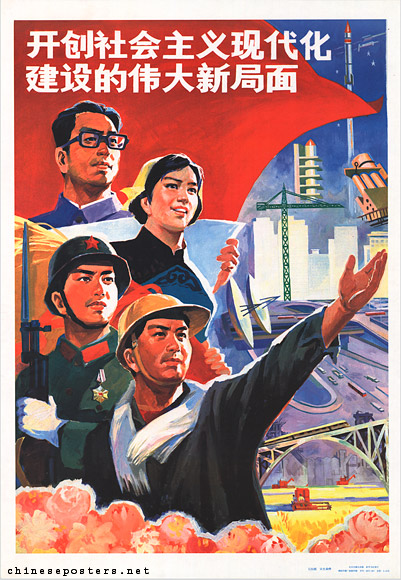 In the reform era, posters have lost their credibility and appeal, and increasingly are considered to beold-fashioned. After the Tiananmen Incident of 1989, propaganda posters were produced that stressed obedience and other qualities that no longer corresponded with the harsh reality of mass unemployment, cut-throat competition, and increasing inequality. Yet, they continue to be published, for example for special events such as the Hong Kong Handover of 1997, the fiftieth anniversary of the founding of the PRC (see the image below), and the resumption of sovereignty over Macao, both in 1999. 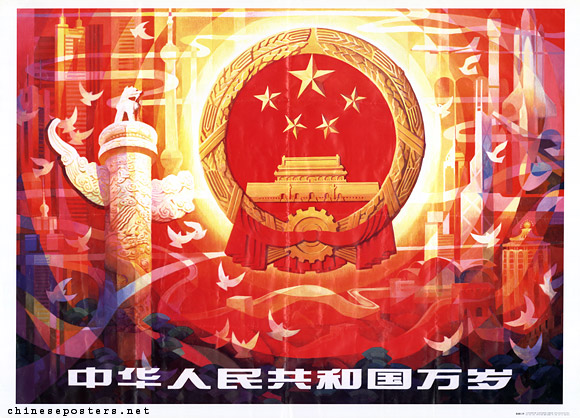 People who before bought posters now see them as old-fashioned, or too tainted by their earlier political usage, even though their subject matter has been brought in line with topics that are considered to be more in tune with the rapidly changing times, social circumstances, and popular taste. It should be no wonder that their numbers and the size of their editions have decreased dramatically, as has the number of Chinese buying them. 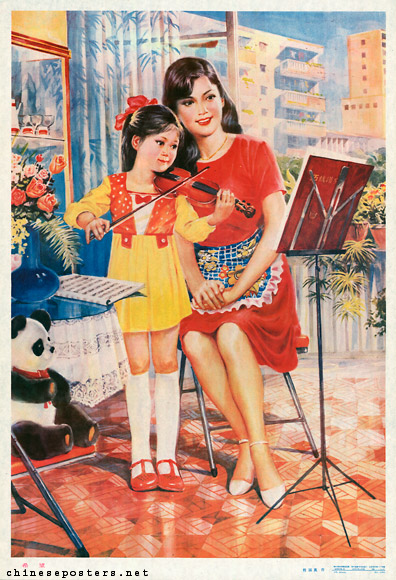 Another indication of changing notions of artistic and aesthetic permissiveness was the reemergence of "calendar girl"-designs, such as the one below. Originally designed by Jin Meisheng, one of the masters of yuefenpai 月份牌 design, the Shanghai People’s Fine Arts Publishing House put it on the market in 1989. 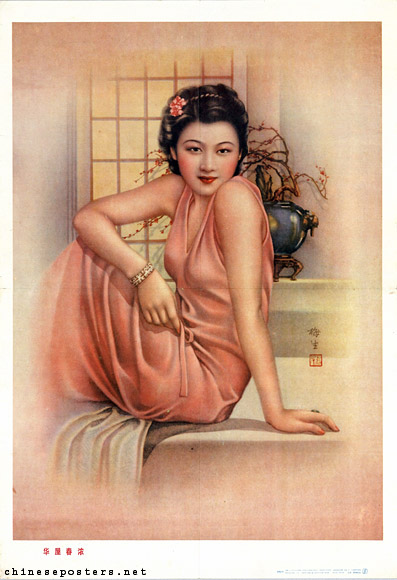 Indeed, in a society in the throes of realizing "socialism with Chinese characteristics", where assertiveness is increasingly valued, the people are convinced they can gain little by following the official examples of self-sacrifice presented by the government. The role of posters as providers of information, as educational tools, has been strenghtened. The SARS-crisis of 2003 saw the publication of rather large numbers of posters, most of them containing clear educational information about how to avoid contamination, and what to do once contamination had taken place. Similarly, posters giving information about HIV/AIDS have appeared.