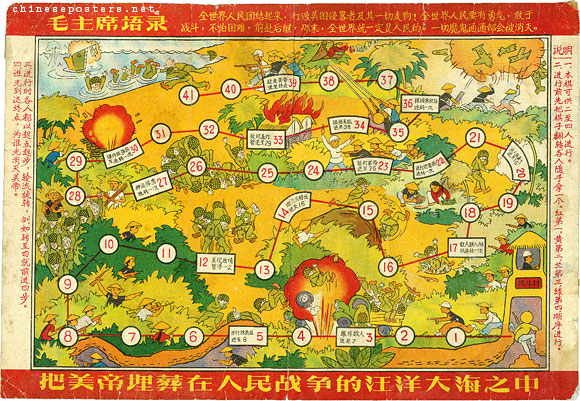 Bury the American imperialists in the boundless ocean of the people’s war, ca. 1965-1970

During the Vietnam War, anti-American propaganda became as violent as it had been during the Korean War. This boardgame, probably published between 1965 and 1970, is an example. It is a game for two to four players, that is won by the player who "destroys the American imperialists first" by reaching number 41. The motto of the game, below, is "Bury the American imperialists in the boundless ocean of the people’s war" (Ba Meidi maizang zai renmin zhanzhengde wangyang dahai zhi zhong). Above is a quotation from Mao: "People of the whole world get united, defeat the American invaders and their bunch of lackeys! The people of the whole world will have courage, they dare to fight, they don’t fear difficulties, no sooner has one fallen than another steps into the breach, that way the whole world will definitely belong to the people. All the demons will be perished completely."

The rules of the game are on the right and left:
1. Two to four people can participate in this game.
2. Before you get on everyone must take a playing piece in their hand. Red first, yellow second, blue third and green fourth, start according to this sequence.
3. When you begin everybody starts from the startingpoint, take turns in spinning [or throwing the dice], for example if you spin [or throw] a four then advance four steps.
4. The one who reaches the endpoint first, is the one who destroys the American imperialists first.

A real-size image that can be printed to play the game is here.