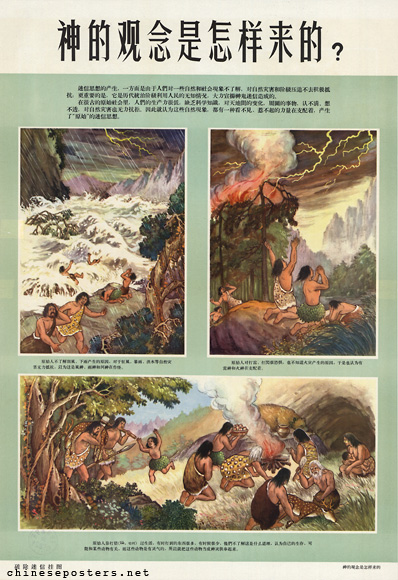 After the Great Leap Forward and the three years of hardship that followed, a sustained new effort was started to combat superstition in all its forms. This formed part of the Socialist Education Movement that was rolled out in 1963 and that aimed to bring cadre corruption to an end and intensify ideological education; in a sense, it was a prelude to the Cultural Revolution. It also echoed the ‘Three Revolutionary Movements’ (Three Red Banners) that Mao Zedong had identified in 1963, i.e., trust science, rely on the collective, establish socialism. From 1964 on, local exhibitions had been organized to eliminate superstition. 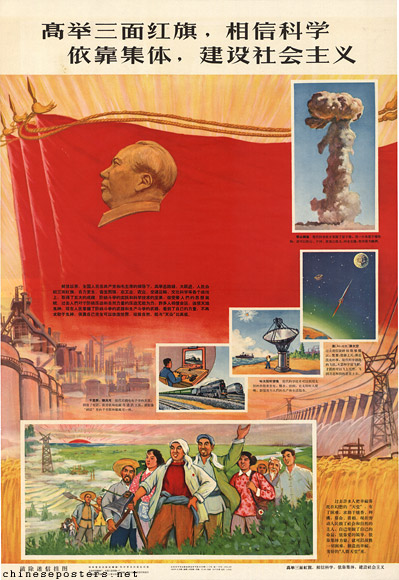 In order to provide guidance for such exhibitions, in 1965 a 35-sheet poster series was published by the Science Popularization Publishing House that in itself could serve as an exhibition when displayed. The topics that were covered ranged from exposing fortune-tellers and feng-shui masters to explaining solar eclipses, the workings of the human brain and answering the question how babies were made. It ended reassuringly with a poster showing Mao and the endless possibilities science had for China.

The full series published in 1965:

Where does the concept of ghosts come from?, 1965

The exploiting classes fabricated gods and ghosts to dominate the people, 1965

The exploiting classes made use of superstituous practitioners to poison the people, 1965

Monsters and demons make use of superstition to stir up trouble, 1965

Reactionary and evil elements use old customs to engage in destructive activities, 1965

Landlords make use of witches to have their power and possessions restored, 1965

Landlords make use of "ghostmarriages" to vainly attempt to seize power, 1965

The class enemy and the proletariat struggle for generations, 1965

The reactionary Huidaomen vainly styles itself as ruler, 1965

"Fortune telling" is a trick to hoodwink people, 1965

The "kanxiang" trick that fools people, 1965

Exposing the trick of the "Buddhist Master", 1965

During solar and lunar eclipses, the "Heavenly Hound" doesn't eat the sun or moon, 1965

Meteors and comets have no influence on the luck or misfortune of people, 1965

Thunder and lightning is not caused by gods and ghosts making mischief, 1965

Plant diseases and animal pest are no natural calamities, 1965

Giving birth to sons or daughters is not "decreed by fate", 1965

There is no "Yin air" in the cellar, "Ghost fire" is phosphorescent light, 1965

The cries of crows and owls cannot influence one's fortune, a yellow weasel cannot turn into a spirit, 1965

The glorious road for practitioners of superstitions, 1965

Transform social traditions, do new things in a new way, 1965