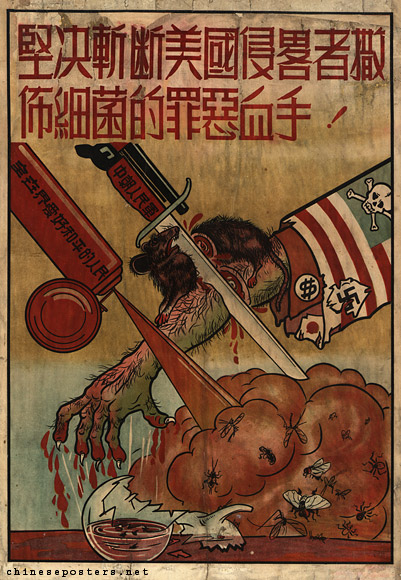 Resolutely cut off the bloody and criminal hand of the American aggressor that spreads germs!, 1951-1952

The Patriotic Health Campaign of 1952 started after the appearance of "poisonous insects" in the winter of 1951-1952. American germ-warfare in North Korea had already been reported earlier, but in early 1952, the People’s Daily (Renmin ribao) explicitly linked these reports with the occurrence of domestic epidemics. In March 1952, eyewitness accounts confirmed the spraying of germs by Americans in Manchuria and Qingdao. This followed hot on the heels of the start of the ceasefire negotiations at Panmunjom that were to end the Korean War. From then on, official newspapers carried reports that offered more and more details about germ-warfare having moved into China itself. Broken germ bombs were found, as were scattered pamphlets with flies and fleas on them; the shells were marked with phrases such as "U.S.TIME" and "BMBOBLEAFLET", similar to those dropped in Korea. The reports did not confirm a connection between the local epidemics that took place and germ-warfare, but by deliberately blurring the differences between the two, the government wanted to encourage public hygiene and health work. Thus, the elimination of rats, fleas and flies, garbage removal, drinking clean water, not eating raw or cold food and preventive injections should be made everybody’s responsibility. 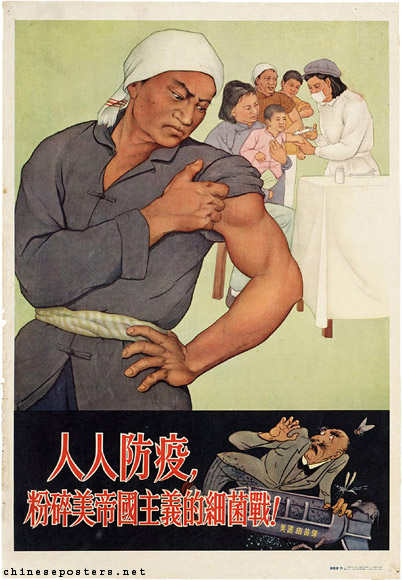 When the germ attacks were confirmed, the Chinese leadership established a central committee for epidemic prevention and launched programs for anti-epidemic injections. Apart from a massive program of injections, all germ-carrying animals were destroyed, special hospitals for inflicted patients were designated and measures taken to quarantaine inflicted areas. At the same time, the anti-epidemy policy took on a different character, one of a nationwide mobilization for social change. The two key components were: to get people in non-disease inflicted areas as deeply involved in the disease prevention movement as people in the inflicted areas so as to establish a routine state penetration in people’s daily lives; and to make people become accustomed to accepting state influence through a massive anti-epidemic campaign. By 1953, a complete institution of disease prevention had been established. 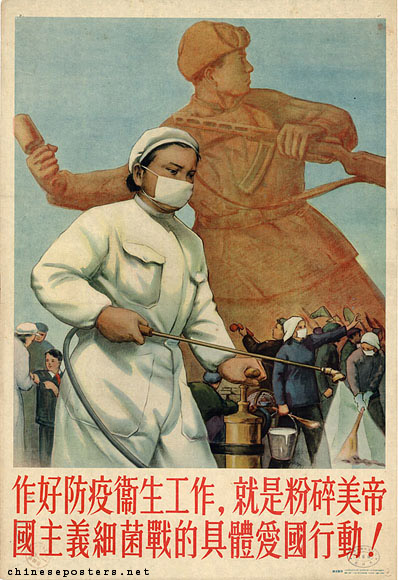 Milton Leitenberg, "China’s False Allegations of the Use of Biological Weapons by the United States during the Korean War", CWIHP Working Paper 78 (2016) 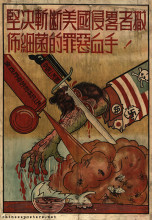 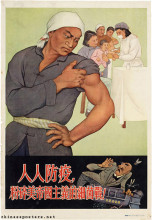 Everybody must take precautions against epidemics… (1952) 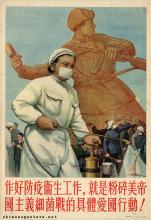 To do a good job in epidemic prevention and hygien… (1952, June) 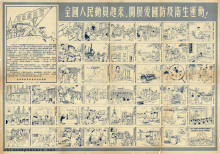 Mobilize the people of the nation, start a Patriot… (1952, June) 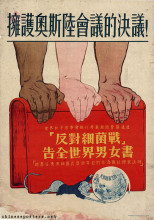 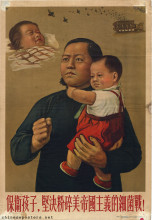 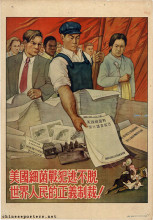 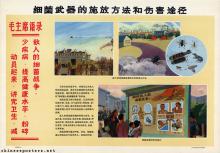 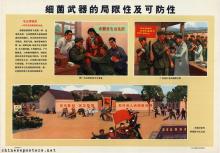 Limitations of and protection against bacteriologi… (1971) 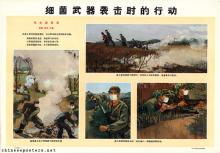 In case of a surprise attack with bacteriological… (1971) 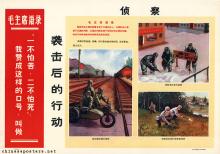 Investigation - After a surprise attack (1971)