The "Patriotic Education Propaganda Poster Set", designed by the Propaganda Department of the Central Committee of the Chinese Communist Youth League, was published in 1994 in "commemoration of the 50th anniversary of the victory of the Chinese People’s Struggle against Japan and the victory of the international struggle against fascism". In spite of its commemorative function, its main aim is patriotic education. By combining powerful images and rousing language, they show how China has shaken off its humiliation and is becoming a nation once more to be reckoned with. The essential role of the CCP in this process is made abundantly clear. The four posters are extremely cleverly made and carry a forceful message.

A centrally located visual element is intended to identify and at the same time frame the theme of each poster. A text of eight lines is superimposed. At the bottom of each poster, a section of the Great Wall is represented, which stands for China and functions as a signifier of timeless national unity. The use of photography and photomontage on all posters points to attempts to upgrade the visual idiom in line with the influences of television and other media. The posters share another formal element: each poster has four small images superimposed on it. Each image has a small caption. These small images are intended to further illustrate and strengthen the main message invoked on each sheet. Some elements are conspicuously absent from this set. Although intended to instill patriotism, the national flag of the PRC is not shown. Likewise, the hammer-and-sickle, often used as visual shorthand for the Party, does not turn up on any of them. 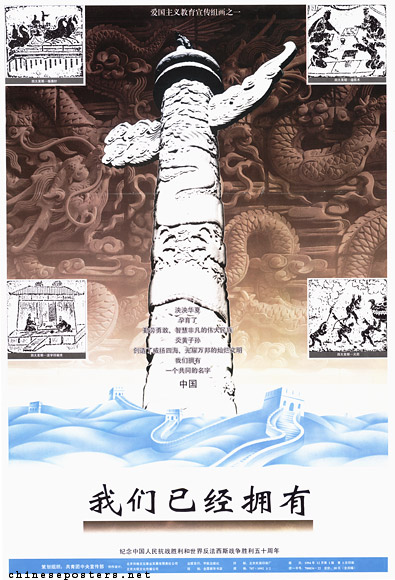 The first poster, Women yijing yongyou [We already have (a name)] dwells on the ancient greatness of China. It is dominated by one of the pillars (huabiao - 华表) that can be seen in front of the Forbidden City. The image of the pillar is superimposed on a relief of a dragon, presumably a section of the Nine Dragon Screen in the Imperial Palace. The four small images bolster the claim to greatness. They show the ‘four great inventions’: the compass, the production of paper, movable type printing, and gunpowder. The text stresses the theme of greatness, singing the praise of "…a valiant and industrious, intelligent and uncommonly great people, the sons and grandsons of Yan (Shen Nong, the semi-divine ‘inventor’ of agriculture) and Huang (Huangdi, the Yellow Emperor), who created a magnificent culture, projecting its strength over the four seas, and its radiance over all nations". This truly has earned the nation the name of Zhongguo (in the meaning of ‘Middle Kingdom’). The imperial past clearly is brought into play to support China’s return to greatness. 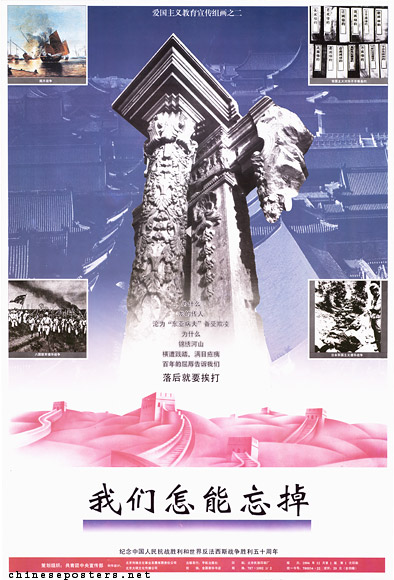 The second, Women zen neng wangdiao [How can we forget], an example of the Chinese ‘victimization narrative’, revolves around the suffering caused by Western nations during the ‘Century of Humiliation’ which started with the Opium Wars and ended with the founding of the PRC in 1949. The central visual element, the ruins of a column situated in the ‘old’ Summer Palace (Yuanmingyuan, 圆明园), ransacked in 1860 by English troops under Lord Elgin, points to the West’s desire to impose its unfair terms. The backdrop is formed by an aerial photograph of a section of the Imperial Palace. The four images show the Opium War; the ‘Unequal Treaties’, imposed on China after the Opium Wars and other 19th century conflicts with Western nations; the march on Beijing by the baguo lianjun 八国联军, the armies of the Eight Allies (consisting of English, French, German, Russian, American, Austrian, Japanese, and Italian troops), that ended the Boxer Uprising in 1900; and the 1938 Nanjing Massacre perpetrated by the invading Japanese Army. The selection of these particular events is interesting, as it suggests the existence of a ranking order of humiliations. The text resonates with feelings of humiliation and resentment, raising the question "Why the descendants of the dragon [were] reduced to the ‘sick man of the East’, and subjected to endless bullying and humiliation". It concludes with the observation that "… the hundred years of humiliation have told us that when you are backwards, you come under attack." The theme and the presentation of the elements of humiliation, clearly function as a stepping-stone to the next poster. 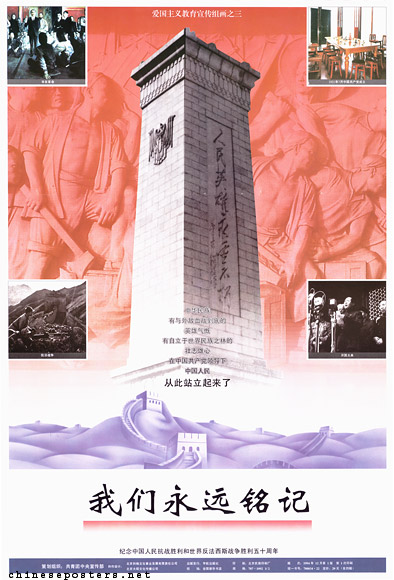 This next poster, Women yongyuan mingji [We will always remember], is dominated by the Monument to the People’s Heroes on Tiananmen Square against a backdrop of a close-up of a section at the base of the monument. It chronicles the creation of the ‘New’ China. The four images show the defining stages in this process, starting with the 1911 Revolution, represented by Sun Yatsen, the "grandfather of the revolution"; the table where the CCP was founded in Shanghai (1921); a scene from the anti-Japanese War; and the famous picture of Mao Zedong proclaiming the founding of the PRC from the Gate of Heavenly Peace in 1949. Images from the May Fourth Movement (1919) or the Civil War, for example, are noticeably absent. The text rhapsodizes on the "…brave spirit of the Chinese people, having waged bloody wars with foreign enemies". On this particular poster, one would have expected the hammer-and-sickle to be used, as the closing lines read "… Under the leadership of the Chinese Communist Party, the Chinese people have stood up." 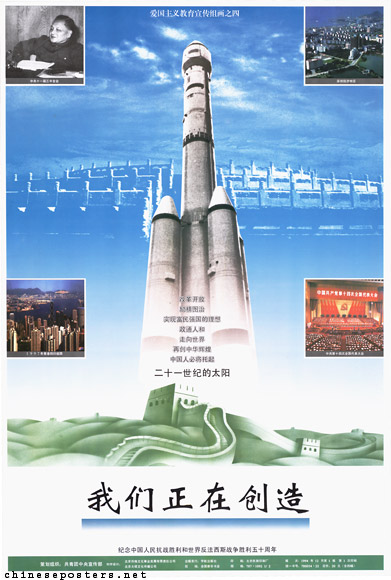 A recurring icon of progress that has been used time and again in propaganda posters since the late 1970s, the launching module, dominates the fourth poster, Women zhengzai chuangzao [We are in the process of creation]. Here it is no longer an artist’s impression, but an actual photograph of a Chinese-designed and produced Chang Zheng [Long March] launching vehicle. The spacecraft is superimposed on the image of the Round Altar, or the Altar of Heaven, where the major ceremonial rites took place in dynastic times. The reason for choosing the image of the launching vehicle is obvious: China has returned to center stage. We may speculate whether this composition has the deeper symbolic intention to put previous imperial prayers and sacrifices directed to Heaven on the same level as contemporary rocket launches. The central topics are the momentous changes that have been brought about since Deng Xiaoping took over power. It celebrates the results of the adoption of his ‘Four Modernizations’-policy, which has resulted in what has been called the second Chinese revolution. At the same time, it addresses developments that have come about in the wake of the economic boom. These include, as shown in the small images, Deng at the 3rd Plenum of the 11th Central Committee (1978); the Shenzhen Special Economic Zone, as a manifestation of the policy of reform and opening up (gaige kaifang 改革开放); the resumption of sovereignty over Hong Kong (1997); and the 14th Party Congress (1992), where market-oriented reform was made central CCP policy. These developments, and the successful economic reforms, obviously have contributed to the rekindled feelings of Chinese grandeur and greatness, and the desire to re-assume super-power status. The text tells us that "… Reform and opening up ... have roused us to realize the ideal of a prosperous people and strong nation (fumin qiangguo 富民强国)". It concludes with the call that "... In order to recreate the splendor of China, the Chinese will have to support the sun of the 21st century."

, an English translation of a classified Chinese document, by Robert Gray