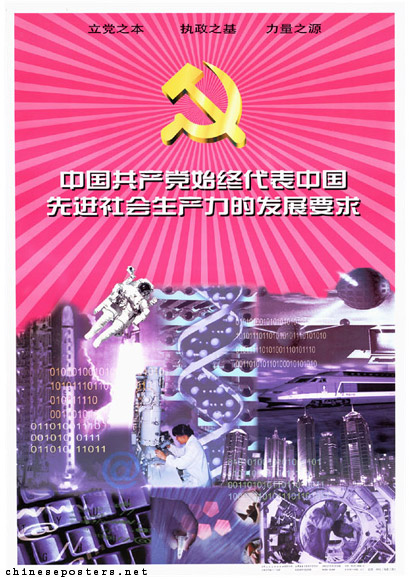 The Chinese Communist Party represents throughout the requirements in the development of advanced productive forces in China, 2001

Since the death of Deng Xiaoping, Jiang Zemin has been actively working on his own contribution to China’s ideological complex. In 2000, his theory of the "three represents" (三个代表, Sange daibiao) was first presented as the nucleus of Jiang Zemin Theory. The theory focusses on the future role of the CCP as "a faithful representative of the requirements in the development of advanced productive forces in China, the orientation of the advanced culture in China, and the fundamental interests of the broadest masses of the people in China." In a way, the "Represents" attempt to replace ideology with loyalty to the CCP without doing away with it altogether, and basically revolve around the need to identify the CCP as the moving force behind the reforms. This downplaying of the revolutionary credentials of the Party, and stressing its relevance in the post-revolutionary period, will make the Party "forever undefeatable". 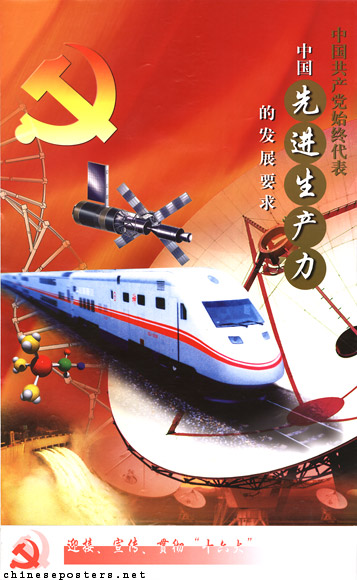 The first one above, presenting the CCP as the faithful representative of the requirements in the development of advanced productive forces, is dominated by images including DNA-research, space travel, IT, and architecture/urban development. Many of the images echo the icons of development used since the early 1980s, but they have been brought up-to-date. The predominance of cutting-edge Science and Technology, embodied by the gleaming high-tech, does not bode well for the many outdated and underperforming State-owned enterprises and their workers, many of whom face unemployment. This principle, in short, can be seen as a theoretical justification for co-opting successful managers, private entrepreneurs and intellectuals into the Party. Switching its attention to the political and economic interests of the growing middle class and the white-collar workforce should make the CCP more relevant. That this means moving away from defending the interests of the proletariat causes much controversy. The themes of high-tech and state-of-the-art technological development, including the famous Mag-Lev train linking Pudong with Shanghai proper, returns in the second poster above, published in 2002. 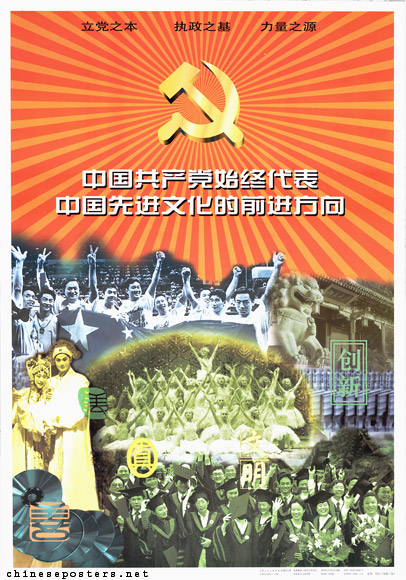 The Chinese Communist Party represents throughout the progressive orientation of the advanced culture in China, 2001 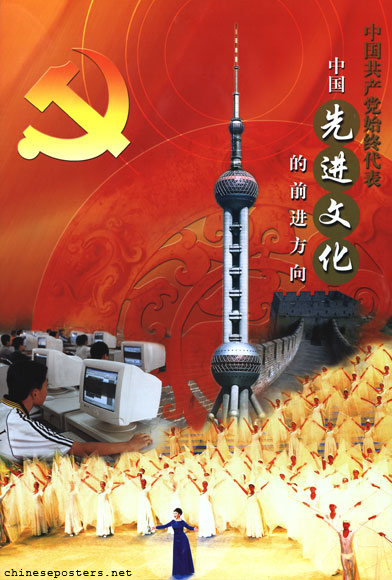 The second set of posters present the CCP as the faithful representative of the orientation of the advanced culture in China. The images brought together in photomontage in the first poster include a sports team (China’s not-so successful soccer players?); Xinhua men, the South Gate of the Zhongnanhai compound; two Beijing Opera actors; ballet dancers; compact disks; and a group of university graduates, wearing gowns and mortarboards. The superimposed characters include wenming (culture), zhen (sincerity), mei (beauty), and chuangxin (bring forth new ideas). Advanced culture does not merely refer to China’s own cultural traditions, but is also meant to include the "studying and adopting [of] all the splendid cultural achievements of the outside world, while upholding Marxism". At the same time, it is obvious that the commercialization of the entertainment industry and the emergence of interest groups focused on profit have had a greater impact on changes in Chinese culture than the politics of the CCP. The second poster above, on the other hand, published in 2002, continues the technological theme set out in the posters devoted to the first ‘Represent’. The last posters (below) define the CCP as the faithful representative of the fundamental interests of the broadest masses of the people in China. The first one features the peasantry, represented - as has become the standard in posters - by a woman; a group of male workers wearing hard hats; a girl holding up a pigeon (or is it a dove of peace, indicating China’s peace-loving stance?); a female scientist; and a large group of China’s ethnic minorities in their distinctive costumes. This latter visual element repeats the scores of posters of the past five decades that in one way or another have called for the unity of all people of all nationalities under the leadership of the CCP. The conspicuous absence of the military here in interesting. This may indicate a shift in the concept of the ‘masters of the nation’, which used to be defined as an alliance of workers-peasants-soldiers (工农兵, gongnongbing). In the early 1980s, intellectuals were added to this triumvirate, after their status had been redefined as that of ‘mental workers’. At the same time, by showing the peasants and the workers, the former mainstays of the Party, this may be intended to allay the suspicions that the interests of these groups are no longer being represented by the Party, as suggested by the first "Represent". The second poster no longer shows the people at all, but concerns itself with Lei Feng, the Hong Kong Handover, and revolutionary statues. 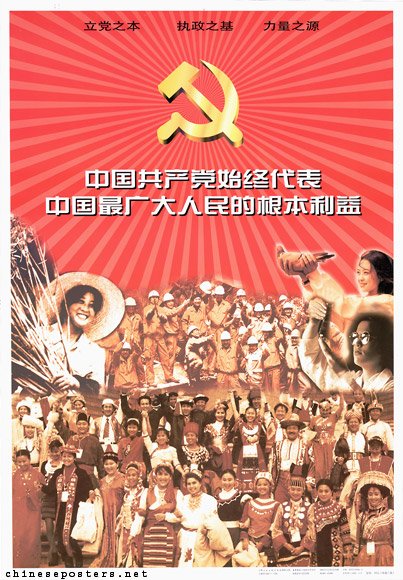 The Chinese Communist Party represents throughout the fundamental interests of the broadest masses of the people in China, 2001 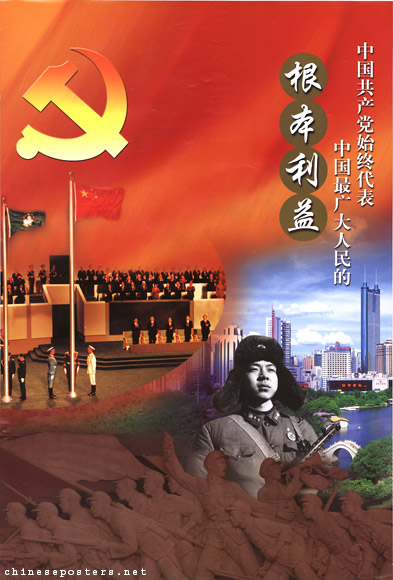 The Chinese Communist Party fully represents the basic interests of the greatest majority of the Chinese people, 2002

A number of observations can be made about the presentation of the "Three Represents". First, it is interesting to see that the Party again has sought recourse in using posters to propagate the theory. This all the more striking, as all indications point to a decreased use of the medium for propaganda purposes. Secondly, the hammer-and-sickle basically has replaced the image of Mao. The stylized rays of sunlight are very reminiscent of the Mao posters that were produced during the Cultural Revolution. Thirdly, in the reader mentioned below, all direct quotes of Jiang Zemin are represented in boldface. This is a throwback to Cultural Revolution practice, when all publications were peppered with boldfaced Mao-quotes. 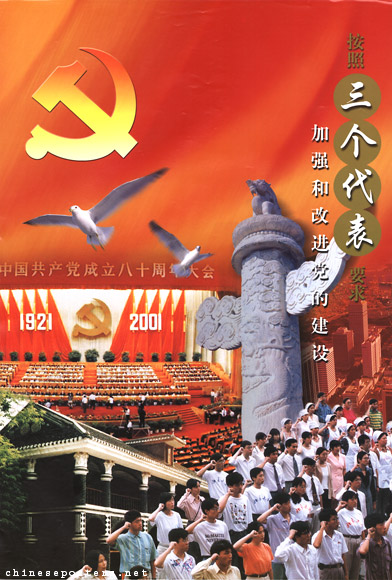 Accelerate and improve Party reconstruction according to the demands of the ‘Three Represents’, 2002

The Theory is considered controversial and has been attacked by both the more conservative and reform-minded sections of the CCP. Despite this, the "Represents" were adopted at the 16th Party Congress in November 2002 and written into the Party Constitution. In March 2003, the National People’s Congress decided to have them included in the State Constitution. In June 2003, the media started to promote a new campaign to study Jiang Theory with the call to "whip up a new high tide to study and implement the important thought of the ‘Three Represents’". Numerous Chinese Internet portals opened special sections carrying relevant and educational essays devoted to this event. One of these sections carried the banner below.

Whip up a new high tide to study the ‘Three Represents’, 2003