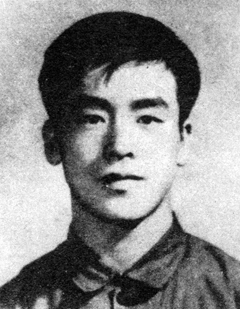 Chen Daishan (陈岱山, 1948-1972) was born in Changchun, Jilin Province. After he graduated from Changchun No. 11 Middle School in 1968, he was assigned to the chassis branch of the Changchun No. 1 Automobile Manufacturing Plant as an assembler.

On 25 December 1971, Chen Daishan was using his dinner break to work overtime. Suddenly, a bright flame flashed from the spray booth of the final assembly line. Aware of the fire, he immediately picked up two fire extinguishers and ran towards the fire, shouting as he ran, "Comrades, go and fight the fire!" Chen rushed in front of the fire fighting crowd. Suddenly, he discovered that the flame was spreading to dozens of paint buckets beside the spray booth. He yelled, "Quickly grab the paint buckets", and then dashed into the sea of flames. Smoke was coming from the edges of his clothes and his trousers were burning. He still moved out, one bucket, two buckets, three buckets... When he was carrying the seventh bucket, it exploded in his arms, hot paint spraying all over him, and he caught fire. The workers pushed him to the ground and extinguished the fire for him. He struggled to stand up: "I... want to... fight the fire... go, fight the fire... it's important..." After that, he passed out in the arms of the workers. Chen Daishan was seriously injured, with a burned area of more than 85%. Although he was rescued by the hospital, he died of septic bacterial infection on 9 February 1972, at the age of 24.