Su Ning (苏宁, 1953-1991) has been used as a role model for military cadres to illustrate the intricacies of the process of modernization and professionalization that has been taking place in the People’s Liberation Army since 1978. Born in Shanxi Province, he joined the army in 1969, and entered the CCP as well. Over the years, he climbed up through the ranks and had attained the rank of luitenant colonel at the time of his death. He served as chief of staff of an artillery unit in Harbin. 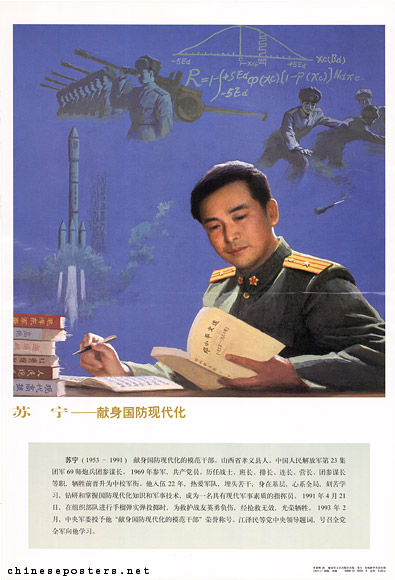 On 21 April 1991, during grenade throwing practice, a live grenade was thrown. Su threw himself on it, thus sacrificing himself to protect the lives of his comrades-in-arms. In 1993, he attained model status; Jiang Zemin and various other Party and Army leaders wrote inscriptions for the emulation campaign calling on the whole people and whole army to study Su’s example.

A number of factors contributed to Su’s elevation to model status. First of all, he had led a simple life and had served the people as Lei Feng had. Moreover, he had written a number of research articles on military affairs, including three on the Gulf War. These two elements made him a contemporary hero who met the demands of modernization. Finally, despite the fact that both his father and father-in-law were senior military officers, Su had never taken advantage of his connections. This made him a role model in opposing corruption as well as the excessive pursuit of material pleasure.

Zhao Yuezhi, Media, Market and Democracy in China - Between the Party Line and the Bottom Line (Urbana etc.: University of Illinois Press 1998) 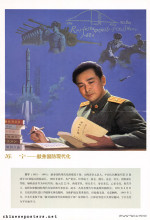