Hu Yetao (胡业桃, 1949-1970), a Model Communist Youth League member of the Chinese People's Liberation Army Navy and naval aviation soldier, was a native of Shiyang Town, Hexian County, Anhui Province. Hu enlisted in the army in March 1969, and joined the Communist Youth League in June of the same year. Following the example of Lei Feng, he applied himself everywhere. Before joining the army, he had rescued a woman who fell into the water and jumped into the rapids to repair the gate of a reservoir that was damaged by the rainstorm.

After joining the army, the cadres and soldiers praised him for being a hard-working man who can’t stay idle. He once took the lead in drilling into the cold water to lay cables, jumping into the mud and carrying wheels on his shoulders to ensure timely supply of cement needed for combat preparation. On 25 January 1970, during the construction of combat preparations, the lights suddenly went out. When he heard his comrade shouting that he was being electrocuted, he rushed forward to rescue him desperately. He pulled the wire and his comrade-in-arms was saved, but unfortunately he was electrocuted himself. On 21 November of that same year, the Central Military Commission awarded him the honorary title of "Model Communist Youth League Member" (模范共青团员). A Hu Yetao Tomb was built in the 1970s and is now located in the front hill of Zhongshili Village, Shiyang Community, Shiyang Town, He County, covering an area of ​​5 acres. Currently, the Tomb has not been fully developed. 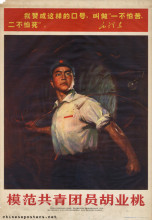