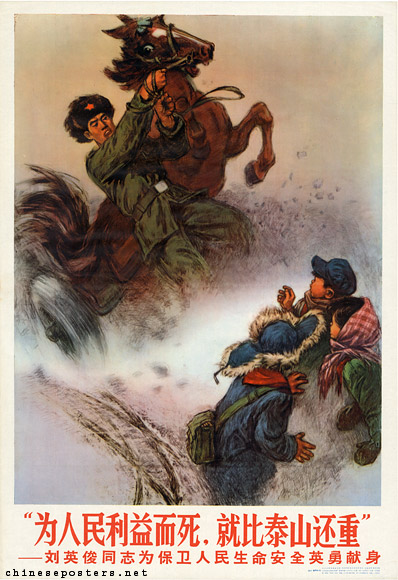 ’To die for the people’s welfare is weightier than Mount Tai’ - Comrade Liu Yingjun courageously gave his life while protecting the people’s safety, 1966

Liu Yingjun (刘英俊, 1945-1966), a native from Changchun, Jilin Province, was from a poor peasant background. In 1962, he joined the People’s Liberation Army. On 15 March 1966, during training manoeuvres, he was riding the lead horse of a team pulling a cannon. The horse was frightened by the claxon of a passing long-distance bus, and threatened to run over six playing children. Liu managed to reign in the horse and save the children, but sustained lethal injuries and died a martyr’s death. 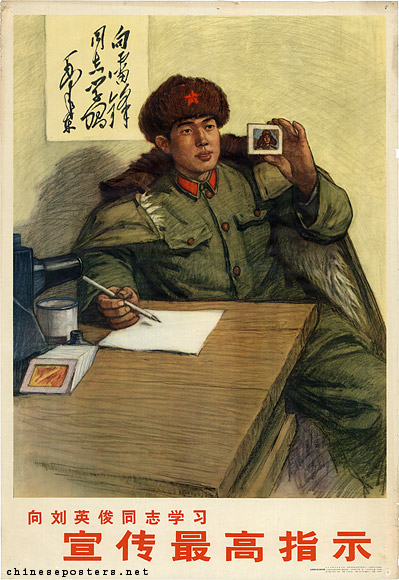 Liu, who was nicknamed ‘The Locomotive’ by his buddies for his boundless energy, was not only made a hero because of his sacrifice, but also because he was known as a tireless student of Lei Feng, whose behavior he tried to emulate (or imitate) in every possible way. In the poster above, we see Liu actually engaged in the study of Lei’s example, thus giving heed to the ‘highest instruction’ promulgated by Mao Zedong to do so. His sacrifice, moreover, repeated and amplified the heroic behavior of another martyr, Ouyang Hai, who died in a horse-related accident in 1963. 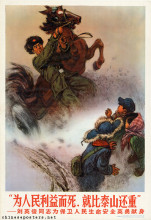 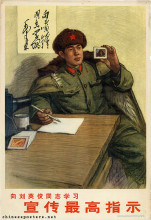