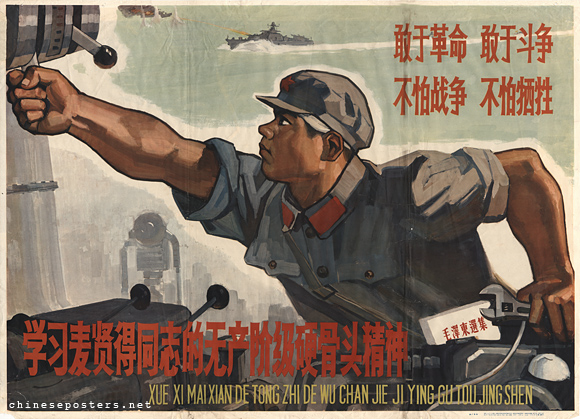 Mai Xiande (麦贤得, 1945) was born into a poor boat people family in Xunbei Village, Guangdong Province. In 1961, he joined the commune labor team after he left school after finishing the first year of junior high school. He joined the People's Liberation Army in March 1964. After enlisting in the army, he went to study at Shajiao Naval Joint School in Humen, Guangdong Province. After graduation, he was assigned to the escort boat No. 611, 4th Squadron, 41st Group, as an electromechanical engineer despite his weak educational background.

In the early morning of 6 August 1965, Mai Xiande's unit patrolled the sea. At this time, the Taiwanese warships "Jianmen" (剑门号) and "Zhangjiang" (章江号) entered the fishing grounds near Dongshan Island, and 4 high-speed escort boats and 6 torpedo boats of the 41st squadron of the Shantou Marine Police District formed an assault formation to meet the enemy. During the ensuing battle, the enemy ship "Zhangjiang" ignited a raging fire, shelling the No. 611 boat. Two shells entered the engine room and the ship lost part of its power. Squad leader Huang Ruxing noticed that the engine room main engine had stopped and immediately signaled Mai to help. A piece of shrapnel hit Mai's right forehead and inserted itself into the frontal lobe on the left side near the temple. He lost consciousness and fell. When the aft angineer bandaged his wound, he regained consciousness. He pushed away the engineer and struggled to stand up. At this time, the blood and cerebrospinal fluid on his forehead stuck to the corners of his eyes and eyelashes, obstructing his vision. However, he stubbornly held on to his fighting position. In the violently swaying engine room, he walked and fumbled and checked the pipes, valves, and screws of each machine and tightened them to ensure normal operations. Discovering that the gearbox had been displaced and being unable to reset it, he chose to pounce on the gearbox and using his body. While holding down the lever with his body, the warship resumed its speed. He persisted, enduring severe pain for three hours until the Taiwanese vessels were annihilated. 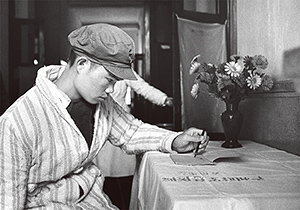 After returning to Shantou, Mai was immediately rushed to Shantou People's Hospital. He had a high fever, was unconscious, blood was flowing, cerebrospinal fluid flowed out of his nostrils, and he had shrapnel in his right forehead, penetrated into his skull; the situation was very urgent. The medical staff immediately gave him a blood transfusion and his condition was temporarily stabilized. However, due to the limited treatment level of Shantou People's Hospital, the shrapnel failed to be removed twice, and the patient was still not out of danger.

Word of Mai's deeds spread to Beijing, and Mao Zedong and Zhou Enlai immediately instructed to send the best doctors for rescue. Mai was sent to the General Hospital of the Guangzhou Military Region by special plane. The hospital received letters from all over the world every day, requesting that they must heal the "steel warrior" Mai Xiande (钢铁战士麦贤得).

Mai survived, but the damage to his brain caused by shrapnel stayed with him all his life. He has epilepsy, weakness in his right hand, hemiplegia, language barriers, and there is obviously something wrong with his logical thinking when speaking. Despite this, and despite the fact that Mai did not die, he attained the status of a hero worth emulating, along the lines of Lei Feng and Liu Yingjun. His deeds remained remembered all the way to the present, as can be seen from Xi Jinping's mentioning him in 2017.

In 1966, Mai received the first-class merit and was awarded the title of Fighting Hero by the Ministry of National Defense. In 2009, he was elected as one of the "100 Chinese People Who Moved Since the Founding of New China". In 2017, Xi Jinping, as Chairman of the Central Military Commission, signed an order to award the "August 1st Medal" to Mai. On 17 September 2019, Xi Jinping signed a presidential order, granting Mai Xiande the national honorary title of "People's Hero", and on 12 December 2019, he won the National Advanced Individual Commendation for Retired Cadres.

Xi Jinping, "Meet the Standards for Party Members" (Points raised at a Party branch meeting in his capacity as an individual Party member, 13 August 2017), in Xi Jinping, The Governance of China II, Qiushi, 25 June 2021 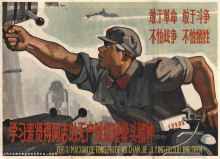