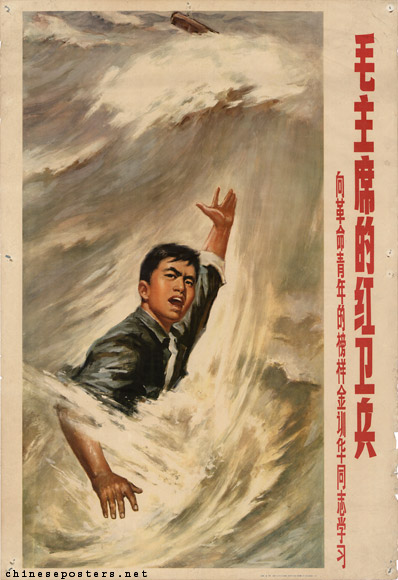 Jin Xunhua (金训华, 1949-1969) was a Shanghai student and an active Red Guard there. In March 1969, he was sent to the countryside in Heilongjiang, in the extreme North East of China, and settled in Xunke County (逊克县, Xunke Xian). In August 1969, the river near his village flooded and two utilitity poles were swept away. Jin jumped into the river, along with one or two other young men. Jin drowned, according to some accounts, while trying to rescue one of the other young men after the poles had been secured.

Soon afterwards, Jin was propagated as a role model for his ‘selfless sacrifice’. The image shown above first appeared in a black and white version in the Shanghai newspaper Liberation Daily (Jiefang ribao, 解放日报). It attracted attention and was reworked as a colour version, reproduced on a poster. This image became widely distributed and well known, endorsed as a ‘model painting’, and also appeared on postage stamps. Jin’s story even became the subject of comic books. All this served to propagate the ideal of ‘selfless sacrifice’ and to support the policy of sending urban youth to the countryside. 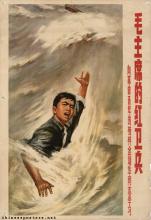 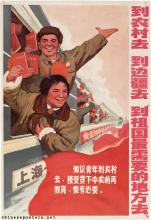