Wang Guofu (王国福, 1922-1969) was born into a poor peasant family in Shandong Province. Due to the exploitation of his family at the hands of landlords and rich peasants, Wang was forced to spend his childhood begging. At the age of twelve, fleeing famine, he became a hired farmhand near Peking. After Liberation, he became a peasant cadre in Daxing county, under Peking municipality. In 1952, he organized the first mutual-aid team in his village, and in 1955, he took the lead in setting up an agricultural producers’ cooperative. That same year, Wang was admitted into the Communist Party. 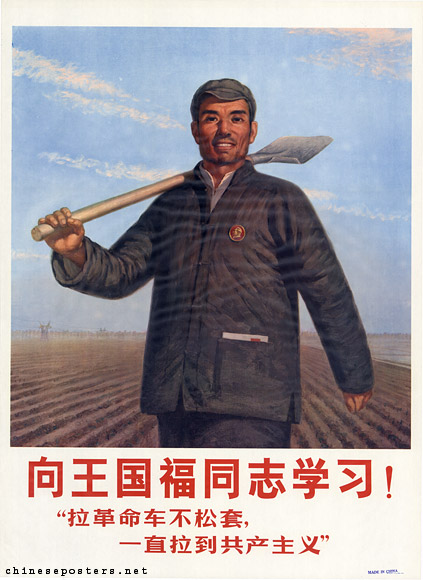 Learn from Comrade Wang Guofu! Pull the Cart of Revolution All the Way to Communism and Never Slacken, 1970

As a cadre and Party member, Wang was tireless in his support for the policies formulated by the Government. Leading the poor and lower-middle peasants, he followed Mao Zedong’s call to learn from Dazhai. He took an active part in the "raging flames of the revolutionary mass movement of the Cultural Revolution". Being a true proletarian fighter, he always sacrificed his own well-being in order to help others. When hospitalized in 1969 because of a stomach illness that would prove fatal, he refused medication and instead studied Mao’s Quotations and the "Three Constantly Read Articles". Having been made a model shortly after his death, he was remembered by his dedication to "pull the cart of the revolution all the way to communism and never slacken". 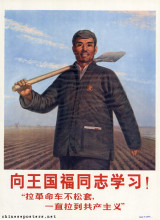