Zhang Zhixin (张志新, 1930-1975) is a very unusual martyr in the official Party register: she spoke out against Lin Biao, Jiang Qing and even Mao himself during the Cultural Revolution. 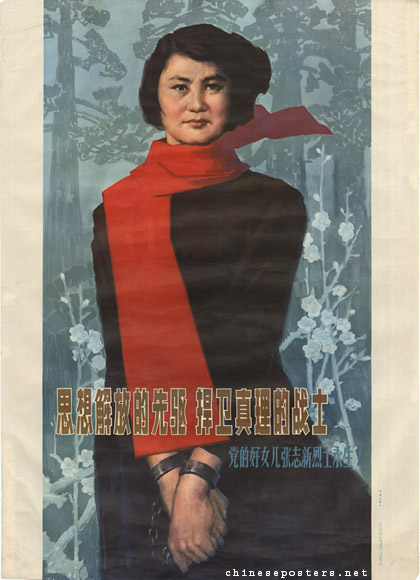 A forerunner of liberated thought, a warrior in the protection of truth ..., 1979

Zhang was born in Tianjin and had an exemplary career. She joined the People's Volunteers Army during the Korean War, studied Russian at People's University, and worked for the Party's Propaganda Bureau in Shenyang (Liaoning Province).

In 1969, Zhang was sent to a 7 May Cadre School, where she had to perform manual labor and undergo ideological reeducation, like countless other cadres and intellectuals from the cities. But during this period of ‘reeducation’, Zhang expressed her opinions strongly. According to her, Mao had become theoretically weak, immodest and less democratic, Lin Biao was too leftist, Jiang Qing and the Central Cultural Revolution Group should be exposed.

Zhang was arrested in September 1969. Even in prison she refused to yield, and kept proclaiming to be an honest Party member defending justice and truth. She was sentenced to death, later changed to life imprisonment. In prison, Zhang was repeatedly tortured and raped.

Forced to attend a "Criticize Lin Biao and Confucius" meeting in 1973, Zhang shouted that Mao should be held responsible for what now were seen as Lin Biao’s crimes. Zhang was sentenced to death again, and executed in a brutal manner on April 4, 1975.

Zhang’s relatives started a campaign for her rehabilition after the end of the Cultural Revolution. In March 1979 Zhang was declared a Revolutionary Martyr, which received a lot of national and international attention. Later that year a statue of Zhang Zhixin as a fierce archer on a striding horse was erected in the People’s Park in Guangzhou.The "Zhang campaign" was toned down after some time. Too much attention for the excesses of the Cultural Revolution was judged undesirable.

Sheila Melvin, Zhang Zhixin: The Woman who Took on the ‘Gang of Four’. The Memory of a Dissident Voice Looms Large 50 Years After the Cultural Revolution, online publication at https://www.chinafile.com/reporting-opinion/caixin-media/zhang-zhixin-woman-who-took-gang-four 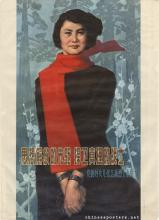 A forerunner of liberated thought, a warrior in th… (1979, July)