Yang Shuicai (杨水才, 1924-1966), from Xuchang county, Henan Province, was twice designated a person rendering outstanding service to his country. Joining the PLA in 1949, Yang was merited for his actions during the battle to liberate Jiangnan. He joined the communist party in the mid-1950s, serving as deputy secretary of the brigade party branch. Fatigued from overwork and suffering from various ailments, Yang Shuicai was discovered dead at his desk on 5 December 1966, reportedly with a copy of Chairman Mao's Quotations at his side.

Held as a model of the kind of selfless and hard-working grassroots party member who endured hardship while striving to improve the lives of those around them, in 1969 (13 and 31 July), the People's Daily ran two items about Yang, as a "model communist party member who spared no effort for the people" (为人民鞠躬尽瘁的模范共产党员) and "an exemplary model of a revolutionary class warrior" (是一切共产党员，一切革命干部，一切无产阶级革命战士的光辉榜样).

East is Red Gallery: Spare no effort for the people (https://eastredgallery.com/products/9) 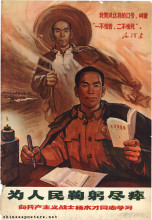